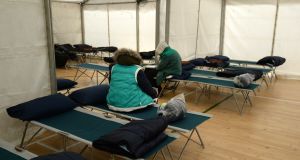 One Dublin hotel was paid between €4 million and €5 million last year to accommodate homeless people.

New figures released in response to a Freedom of Information request show another hotel received payments between €2 millionand €3 million.

The figures released by the Dublin Regional Homeless Executive (DRHE) show a further 11 hotels received between €1m and €2m, with an additional 13 hotels receiving payments between €500,000 and €1m.

In addition, the council paid €12.3m to hostels and B&Bs.

Last December, 70 hotels around the capital were being used, an increase of four on the 66 hotels housing the homeless in January 2017.

The latest figures for February show 1,329 homeless families in emergency accommodation in the capital including 2,801 children.

The figures also show, as part of the Government initiative to establish ‘family hubs’, the council spent €8.75m in 2017.

Family hubs are group-style homeless shelters for families and have been rolled out over the past 16 months as a measure to reduce the number of families staying for long periods in hotels.

In all, the council spent €97.48m on emergency accommodation in 2017, including funding to non-profit organisations such as the Peter McVerry Trust, Dublin Simon, Focus Ireland, Crosscare and the De Paul Trust.

The DRHE figures also show the council spent €819,072 on a helpline for the homeless over the year.

On the hotel spend, Independent Dublin City Councillor Mannix Flynn said: “The spend is outrageous, but it is not surprising.

“Hotels can charge a premium rate as there is a very large demand for hotel rooms in Dublin, he said. “The notion of housing people in a hotel just beggars belief and can have catastrophic psychological impact on those families and the children concerned. These people have had their lives suspended living in these artificial situations that has a massive impact on them. Homelessness is on the landscape to stay.”