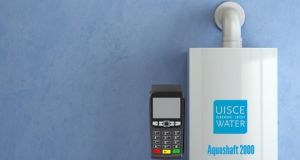 The new machines are expected to accept credit and debit card payments.

The Government is to propose the roll-out of pay-as-you-go water metering for social housing in a move likely to spark fresh protests and political opposition.

As authorities struggle to contain leaks in the wake of Storm Emma last month, costs are likely to eat into the next Budget and Irish Water may seek a subvention from central government. The Government is already under pressure to increase public sector pay ahead of Budget 2019 meaning the cost of fixing leaks will further impact the public finances.

In response, the Government wants to raise extra money and has proposed the introduction of pay-as-you go mains supplies in the State’s social housing stock and on a voluntary basis for private householders.

A proposal expected before Cabinet in the coming weeks says the aim of the move is two-fold - to cut down on wastage by imposing a financial barrier to over-use and, secondly, to provide a source of revenue to help fund repairs on the water network.

The document, seen by The Irish Times, proposes that all new social housing stock is fitted with pay-as-you go devices as standard and a retrofitting programme would begin early in 2019. Private landlords benefiting from the Housing Assistance Payment (HAP) scheme will be encouraged to have the devices installed in properties they own and will be able to write off the full cost of installation against tax as an incentive.

Irish Water confirmed in February that plans are in place to introduce excess water charges from next year. A report from the Commission for Regulation of Utilities (CRU) confirmed the suspension of water charges would continue until December 31st, 2018.

Customers would be able to top up their water accounts using debit or credit cards but coin operated devices are not planned.

However, authorities are said to be looking at a system whereby extra water credit could be earned by households which commit to having no more than one shower per person every two days as showers have been shown to be extremely wasteful.

“Pay-as-you-go customers must be encouraged to take extra measures to cut down on excess use of water,” the document states. “Limiting personal showering frequency may be rewarded with extra or cheaper water credit under any scheme going forward and all things being equal. Householders who can show they have laid tarmac in their back gardens, thereby removing the need to use hose pipes in the summer, may also be rewarded,” it adds.

A Government source said: “This proposals outlined in this document are necessary but Fianna Fáil are not going to be happy.

“We will just have to deal with that issue when it happens, but we have to stop the water wastage,” she added.

Under the confidence and supply arrangement agreed in 2016 Fianna Fáil said it would support the minority Fine Gael-led Government but part of the deal was that plans for widespread water charges were abandoned.