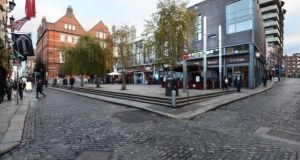 The owners of a prominent Temple Bar music venue have denied they plan to convert it into a “super pub”. Photograph:Dara Mac Dónaill

The owners of a prominent Temple Bar music venue have denied they plan to convert it into a “super pub”, following a Dublin City Council ruling on its future use.

The council’s planning department has ruled the Button Factory, formerly the Temple Bar Music Centre, cannot in the future operate using a pub licence, unless planning permission is obtained. The ruling could damage prospects of any future sale of the building.

The ruling was sought by the Temple Bar Cultural Trust, a council-owned company, citing concerns that if the pub licence were granted “there would be nothing to prevent the premises being operated as a ‘super pub’ in the future”.

The owners of the venue, Nottub Ltd, said they have “no intention to operate a super pub” and said the use of the term “super pub” by the trust was “really unhelpful” and had been used to “paint a terrible picture of our intentions”.

The trust’s language was that of a “rogue planning objector”, the company said.

The trust sold the building on Curved Street last year to Paddy Dunning and Paul Clinton’s company Nottub, for about €3.5 million. The businessmen had been operating the music venue for many years under a lease. Under the terms of the sale the trust retained a “head lease”, which meant it would have to consent to any licence change.

Nottub wants to change the alcohol licence for the venue from a theatre licence to a full pub licence. The company said it was seeking the change to regularise its current bar opening hours, and not to extend drinking time or turn the venue into a pub.

The theatre licence allows the bar to open 30 minutes before and remain open for 30 minutes after performances.

As the venue operates Rock n Roll Museum tours throughout the day, the bar already keeps the same hours as allowed under a pub licence, Nottub said, because the tours are classed as performances.

However, it said “if we lost the continuous Rock n Roll Museum tours it would de-legitimise our established opening hours of the ground-floor bar”.

The trust said if the licence change went ahead, the primary activity of the venue would change from a cultural one to “simply drinking alcohol” which, it said, could cause problems for surrounding residents.

It said Nottub may sell the building in the future and with the benefit of the new pub licence there would be nothing to prevent the new owners opening a “super pub”.

Nottub said the trust was making an “erroneous assumption” about its plans and was behaving in a manner “you would expect from an ill-informed rogue planning objector”.

The council accepted the trust’s arguments. It said the proposed licence change would make pub use “independent of the theatre use” and ruled the venue cannot operate using a pub licence unless it obtains planning permission.

The council’s ruling can be appealed to An Bord Pleanála.