‘Hand of history’ helped sign off on peace process

Short documentary chronicling the process and completion of the landmark Belfast Agreement. Video: The Detail 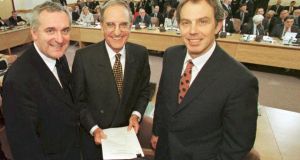 It was 6am at Stormont’s Castle Buildings on Good Friday 1998. The facilities for the media had not provided for an overnight stay, with the result that reporters and camera crews were left sleeping on bare boards.

They stirred themselves to attend a press conference given by the leader of the Alliance Party and, by the time he was finished speaking, everyone was wide awake. Hardly able to believe his own words, Lord Alderdice informed us of a “quite remarkable” development in the peace agreement talks that had continued through the night.

A deal was on the cards, after all.

The date was April 10th and the inter-party talks had been at a level of high intensity for the previous 10 days. Parallel negotiations were under way between the British and Irish governments to come up with proposals the party leaders could agree to and persuade their followers to accept.

Prime minister Tony Blair and taoiseach Bertie Ahern were working flat-out and, on the other side of the Atlantic, then president Bill Clinton was watching every move and phoning key participants with advice and encouragement.

There were three elements at stake: strand one was concerned with the internal governance of Northern Ireland, strand two covered north-south institutions and strand three dealt with “east-west”, ie, British-Irish, relations.

The IRA had resumed its ceasefire in July 1997 and there was a real opportunity to bring a permanent end to the long-running conflict. The main challenge was to make sufficient concessions to Sinn Féin, as the political wing of the movement, without alienating the other participants, especially the Ulster Unionist Party, chief political force in the Protestant community at the time. It didn’t help that the UUP had a policy of refusing to talk to Sinn Féin or even to return their greetings in the corridors.

The Irish government was willing to modify articles 2 and 3 of the Constitution (the so-called claim to Northern Ireland), making it subject to majority consent in each jurisdiction, but was at the same time demanding a North-South Ministerial Council (NSMC) and ancillary bodies with executive powers. This inevitably generated fears among unionists about a dilution of British sovereignty over the North and their view was that the council and its agencies should be subordinate to the proposed Northern Ireland Assembly.

Policing was another highly contentious issue that had been at the root of the northern troubles. On the nationalist side, the Social Democratic and Labour Party was backing a commission for police reform, but unionists were very nervous about this. The SDLP also wanted a powersharing, cabinet-style executive to run the North, whereas the UUP was opting for a loose structure of committees to run departments, rather than an executive which could include one or more Sinn Féin ministers.

A 65-page draft agreement was given to the parties at 12.30 on Tuesday April 7th but, later in the day, UUP veteran John Taylor declared he wouldn’t touch it with “a 40ft pole”. His party leader, David Trimble, published the contents of a message to Blair which also said that the UUP could not recommend the document. At a later stage, Trimble revealed that more than 60 areas for cross-Border co-operation were proposed in the draft, which of course was anathema to unionists.

There was now a full-blown crisis over proposals on strand two and Tony Blair flew in that evening but stayed at Hillsborough Castle, some 20 miles away, for the moment. That was where, having declared that it was “not a day for soundbites”, he famously continued: “I feel the hand of history on our shoulder in respect of this, I really do . . .”

Bertie Ahern’s mother, Julia, had died the previous day aged 87 years and the funeral was arranged for Wednesday, April 8th. However, the Taoiseach flew to Belfast that morning for a breakfast meeting with Blair before returning home in time for the Requiem Mass. He arrived back in the evening for what was later described as the key meeting of the week, with Blair and Trimble. The unionist version has it that Ahern was forced in blunt terms by Blair to back down on the “wish-list” in strand two, although Irish government sources say the taoiseach already realised it was too much for the UUP. British and Irish officials worked into the night, finally arriving at a joint position that there would be “at least six” North-South implementation bodies and that the NSMC and its agencies would be set up under Westminster and Leinster House legislation.

The taoiseach had left for Dublin at 1am but returned to Belfast at 9am – prior to the Belfast Agreement, he refused on principle to sleep overnight in the North.

On the evening of Thursday, April 9th, Rev Ian Paisley MP, who had previously withdrawn from the talks, turned up outside Castle Buildings to denounce the impending “sell-out” of the unionist cause. However, loyalists who had previously been on the same political wavelength, heckled him as he was giving a news conference. This was seen as a major change from their united opposition to the Sunningdale powersharing agreement in 1973-1974.

Although midnight on Thursday had been set as a deadline, the talks continued and within a few hours agreement was reached on strand one between the UUP and SDLP to have a cabinet-type executive to run Northern Ireland. When Seamus Mallon arrived back at the SDLP rooms with the good news, the warm embrace he received from his delighted colleague, Bríd Rodgers, was captured in silhouette by the TV cameras outside.

Around the same time, Gerry Adams and the late Martin McGuinness had yet another meeting with the two prime ministers. It was agreed that politically motivated prisoners would be released within two years. In a remarkable development, Gerry Kelly of Sinn Féin approached the loyalist Progressive Unionist Party about making a joint demand for a one-year release deadline, as offered by Blair and the Northern Ireland secretary, the late Mo Mowlam, but the PUP refused.

Decommissioning of paramilitary arms and explosives was one of the most sensitive issues in the entire process but this was fudged and long-fingered. McGuinness said later that the prime ministers were told it was a “walking issue” for Sinn Féin unless the demand was watered-down.

Trimble left to grab a few hours’ sleep at a nearby hotel but had to return before eight o’clock because of concern among UUP delegates at the looming prospect of Sinn Féin ministers as part of a powersharing executive, without a prior handover of weapons.

The UUP leader spoke on the phone with Clinton who was in contact with various participants right throughout the night. Having obtained a letter of comfort from Blair on the issue, Trimble declared his intention in the afternoon to support the agreement.

According to sources, he said, “I am doing it”, and left the meeting with his UUP colleagues, some of whom were still unhappy. Jeffrey (now Sir Jeffrey) Donaldson MP left Castle Buildings over the issue, arousing great curiosity among journalists who were variously told that he had other commitments or was going on holiday.

At 4.45pm, Trimble informed George Mitchell, overall chair of the talks, that the UUP was on board. As a former US senate majority leader, Mitchell knew the importance of seizing the moment and he convened a plenary session of the talks at 5pm where the Belfast Agreement was approved on Good Friday.

It took about 30 minutes to signal the end of a conflict that had lasted 30 years. Deaglán de Bréadún is a former Northern Editor of The Irish Times and author of The Far Side of Revenge: Making Peace in Northern Ireland (Collins Press, 2008)