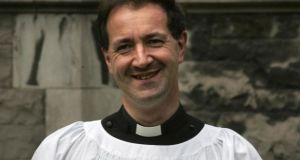 Bishop Michael Burrows said: “I will be voting for Repeal because I believe, as I did in 1983, that the text of the Eighth is incorrigibly flawed.” Photograph: Dara McDónaill

A Church of Ireland bishop has said he will be voting for the removal of the Eighth Amendment to the Constitution in the May referendum.

Bishop of Cashel, Ferns and Ossory Michael Burrows said: “I will be voting for Repeal because I believe, as I did in 1983, that the text of the Eighth is incorrigibly flawed.”

He added: “While I may be anxious about what may happen next, I believe sufficiently in parliamentary democracy to hand the matter to legislators and indeed to trust them – that is their duty and their vocation.”

In his bishop’s letter for April 2018, posted on the diocesan website, Bishop Burrows said “it would be tragic if the cynicism that often seems (largely unfairly) to surround politicians made us less than mindful of the privilege of living in a parliamentary democracy”.

He added: “It has always been the practice of the Church of Ireland to pray unceasingly for our legislators – in the coming months they may need that prayer perhaps more than ever.”

It is believed Bishop Burrows is the first bishop in Ireland to publicly declare he will be voting for repeal in the May 25th vote.

This week the two Church of Ireland archbishops took a different position, saying “unrestricted access to abortion in the first 12 weeks of pregnancy, or indeed at any stage, is not an ethical position we can accept”.

Such access to abortion would be made available by legislation following removal of the amendment.

In their statement, the Church of Ireland Primate, Archbishop Richard Clarke and Archbishop of Dublin Michael Jackson said: “Now that the Government has made known the general scheme of a Bill which it would introduce should the referendum on the repeal of article 40.3.3 of the Constitution of Ireland be passed, voters face a stark decision.”

They asked church members “to think through the issues involved carefully and with prayer over these coming weeks.”

Meanwhile at his first chrism Mass in St Mary’s Cathedral Kilkenny last Thursday, the new Catholic Bishop of Ossory, Dermot Farrell, asked: “Is it just to terminate the life of the unborn child? Is it just that Down syndrome or other illnesses deprive the unborn child of the right to birth and to life?”

He continued: “The attempt under way to impose a questionable right of the strongest over and above innocent life is a very slippery slope. To a woman in the grip of fear and traumatised – a quick death is proposed.

“This slippery slope, naively embraced by many convinced supporters, is too slippery to be defended as a right. On the contrary it depends on a cynical vision of society, tending more and more towards a subtle form of discrimination. Human life is sacrificed to the false gods of usefulness and career.”