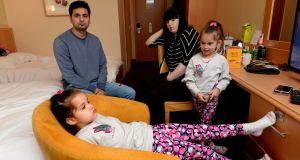 Adeel Bashir and Anita Doktere with children Javieria and Saire. The family lost their possessions in the Metro Hotel fire in Ballymun. Photograph: Cyril Byrne

Up to 21 households whose homes were destroyed in a fire in Ballymun this month face destitution after Easter as provision of their temporary accommodation ends.

Investigations continue into the cause of the fire at the Metro Hotel and apartments in Ballymun on Wednesday, March 21st, which seriously damaged 26 apartments, destroyed four and resulted in 150 people having to leave the building. Some 21 of the 30 apartments were occupied.

No one has been able to return to live in their homes. The 88-room hotel remains closed.

Metro management has been paying for accommodation for the households – including seven families with children – at local hotels. However, in a letter on Thursday, tenants were told “accommodation supports” would continue “until Wednesday, April 4th”.

A “potential interim accommodation solution (of up to six weeks’ duration)” is suggested – housing them at local student accommodation at a cost of €205 per person per week.

The hotel’s general manager Mark Williams said staff had “worked around the clock” to help find alternative accommodation, but after Wednesday “it’s up to them to source longer-term housing”.

“They are best placed to assess their own needs. We are offering each household a goodwill payment of €1,000, or €2,000 to four of the families whose homes were completely destroyed.”

Among these are Adeel Bashir, Anita Doktere and their children Javieria (7) and Saira (5). The 13th floor apartment they had rented for three years was destroyed. They were out when the fire started. They have been accommodated in a number of hotels since, most recently near Dublin airport.

“Every corner of the apartment was important to us. We made it our home. Gone,” says Ms Doktere, adding that they are “in shock”.

Mr Bashir has not been able to go back to work as a security guard. “My GP told me not to go for a few weeks.”

He has been looking at rental listings but has not yet been able to get a viewing. With the Easter holiday it will be Tuesday before he can resume searching. “So we have two days to find somewhere before check-out time on Thursday.”

He said the local area office with Dublin City Council was unable to advise him. “They told me they had no plan for us in the Metro. They told me to go to the homeless section.They say to come back on Thursday with our ID but it was ruined in the fire. There is nobody helping us.”

Asked about the student accommodation as a stop-gap, they say they cannot afford it. “That would be €820 a week for us – €3,280 a month. Impossible,” says Ms Doktere.

Local Independent councillor Noeleen Reilly called on Dublin City Council to expedite families’ applications for the housing assistance payment. “There also needs to be a complete review of the strategy for the aftermath of disasters like this. It seems none exists, and families are just expected to fend for themselves.”

A council spokeswoman said: “If these families are at risk of becoming homeless they need to make contact with [homeless services] as soon as possible.”