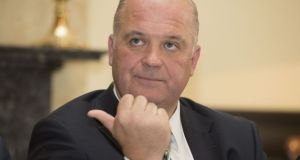 Labour has called on Minister for Health Simon Harris to explain the “appalling treatment” of a leading patient advocate by his department.

This follows the release of documents under freedom of information showing a serious dispute between the department’s chief medical officer Dr Tony Holohan and CervicalCheck patient advocate Lorraine Walsh. Both sit on a steering group set up to ensure recommendations on improving the cervical cancer screening programme are implemented.

Dr Holohan wrote to Ms Walsh last March, taking exception to remarks she allegedly made to a journalist criticising his role in the CervicalCheck controversy and calling for his resignation.

The letter, on department-headed notepaper, warned Ms Walsh to expect a “very strong response” if the remarks were repeated in public.

“You have also issued tweets in which you have made baseless allegations against me which are at variance with the facts,” Dr Holohan said in the letter, obtained by Labour health spokesman Alan Kelly.

Dr Holohan invited Ms Walsh to take part in a “mediated discussion” in relation to the “false beliefs” she may hold about him.

Despite further email contact between the two, this never took place.

In a covering note to the documents released under freedom of information, the department seeks to provide “context” to Mr Holohan’s letter to Ms Walsh.

It said a statement attributed to Ms Walsh did not reflect “factually” the advice Dr Holohan gave in relation to issues emerged about CervicalCheck in April 2018.

Dr Holohan’s approach at the time was to seek a short time for his team to “establish the facts”. This was similar to the approach taken in relation to the deaths of babies in Portlaoise hospital, which ultimately led to a wider external investigation.

Mr Kelly also accused the Minister of “dragging his feet” on the release of the information.

A spokeswoman for Mr Harris said on Friday he was not aware of Dr Holohan’s letter in advance of it being sent to Ms Walsh. She the Minister accepted the context as outlined in the freedom of information request.

“The Minister is in regular contact with the patient advocates and believes it is vital we support them and ensure their input is valued and respected, as does the department. He, the chief medical officer and the patient advocates are united in their goal of effectively eradicating cervical cancer within a generation,” the spokeswoman said.