Erosion of trust in society is a threat to food safety, says European food authority 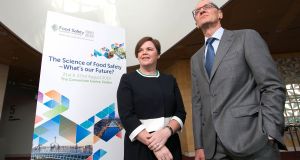 The world has to wake up to the implications of a new era of rapid food innovation, including the generation of synthetic meat that will be routinely available on supermarket shelves or manufactured in the home, an international conference has been told.

Speaking at a conference in Dublin on The Science of Food Safety: What’s Our Future?, he cited the latest valuations of artificial meat industry by venture capitalists at $140 billion (€126 billion).

Its latest manifestation was going beyond plant-based meat to “truly synthetic meat” cultured using stem cells from cattle. The fat, collagen and haemoglobin content could be set precisely by a digital device.

“That point will be very interesting,” Prof Ferguson said.

It has been predicted that every home would eventually have its own bioreactor, that would produce a piece of meat by 3D printing it, on instructions from a smartphone, he said. And these disruptive technologies would radically change traditional food chains.

“This is real. Think about the food safety implications . . . If in the regulation business, you need to keep up with this.”

How to feed 10 billion people without increasing greenhouse gas emissions would be another immense task facing the world, he added.

“Climate change is the biggest challenge to agriculture and the food system probably in modern history.”

Prof Ferguson highlighted how Crispr technology made possible a genetically modified plant capable of capturing 30 per cent more carbon in the soil.

“Won’t it be interesting to see how society and the consumer reacts to genetic manipulation of food that is not about increasing profit but about doing good for the planet?”

While carbon taxes might work in the energy sector, if applied to food industry “it may well end up with people starving”, he said. As a consequence, science and innovation would be required. He had no doubt that it could deliver in such circumstances while huge opportunities would also arise.

European Food Safety Authority (EFSA) director Dr Bernhard Url said: “Food in Europe has never been safer” but an erosion of trust in society was a threat to the food safety system. This trend was seen in the vaccination controversy, the response to use of chemicals in agrifood industry, and in the reaction to Crispr technology.

A particular problem was the expectation that there should be zero risk in food but that was impossible, Dr Url said. “It was also indicated in the ongoing controversy about glyphosate herbicide with citizens asking how can it be that we find glyphosate in the urine of my children. I don’t want that.”

EFSA explains that up to a certain concentration it is safe and it is true, he said, “but that is not the question”.

It was a values issue that had to be negotiated at a political level, he said; scientific risk and evidence needed to be kept separate from politics. When it was not, citizens can dismiss the science when it doesn’t match their values and accuse scientists of being corrupt.

Dr Pamela Byrne, chief executive of the Food Safety Authority of Ireland, which is hosting the event to mark its 20th anniversary, said we were at an important milestone in the evolution of our food systems.

“Science is required to create more sustainable, nutritious and healthier food, but the rapid speed of change in production processes must be mirrored by robust analysis and oversight to ensure food integrity and safety,” she said.