More than 1,000 women to get reviews of smear tests soon 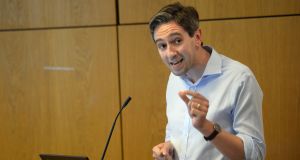 An aggregate report summarising the findings of the review of 1,051 women’s test history will be provided to the Minister for Health, Simon Harris. Photograph: Dara Mac Donaill / The Irish Times

More than 1,000 women are to receive the results of a British review of their smear tests under the cervical cancer screening programme in the coming weeks, according to the Health Service Executive.

Each of the women will be provided with a personalised assessment of their smear history compiled by the Royal College of Obstetricians and Gynaecologists (RCOG), as part of the independent review established last year.

Where RCOG finds a significant discrepancy between its review of a woman’s smears and her original test results, the woman may be entitled to make a claim under the tribunal being established by the Government in response to last year’s CervicalCheck controversy. She will also be entitled to access a package of State supports, including a medical card and counselling.

An aggregate report summarising the findings of the review of 1,051 women’s test history will be provided to the Minister for Health. This will show what proportion of cases agree with the CervicalCheck result, and “in what percentage there is a disagreement that may have been responsible for failing to prevent cancer”, according to RCOG.

The review, which takes in both the 221 group of women at the centre of last year’s controversy over CervicalCheck, and a separate cohort of women whose cancers were notified to the National Cancer Registry, was commissioned in May 2018 with the aim of providing a comprehensive overview of the screening history of all women diagnosed with cervical cancer over the past decade.

However, there were delays in setting it up and it is unlikely to be able to provide the desired comprehensive overview due to a consent rate of 63 per cent among the women who were contacted.

According to the HSE, it is providing logistical support to the RCOG team, including validation of data from multiple sources, an “extensive” consent process and overseeing the complexities of retrieving the cytology slides, which were transferred to a review laboratory in the UK.

Analysis of the 1,739 slides, which began in February, is now complete. RCOG’s expert review panel expects to finish writing more than 1,000 individual reports for women by the end of August, after which the HSE will begin communicating the results of the review to women.

“The HSE will make every effort to facilitate the communication of these reports to women, or their next-of-kin, in an honest, compassionate and considerate manner. We have been working closely with healthcare professionals and patient representatives on this complex and challenging process,” a spokeswoman said.

Some women whose slides are being reviewed by RCOG have alleged a lack of communication about the process, but the HSE said it had endeavoured to keep women informed of progress during the review.

Women were sent updates in June and July, including information on what they could expect to receive in their personalised reports, the spokeswoman said, and an information phone-line was in operation. “A further update will issue from the HSE, on behalf of RCOG, to individuals involved in the review before their reports are communicated to them.”

Patient advocate Lorraine Walsh, one of the 221 group of women, said affected women must be offered the option of a face-to-face meeting with an expert to discuss their results. These meetings should be triaged, so the sickest women, and those with the most discordant results, are seen first.

“These women have been waiting for more than a year for this process to be completed, so the very least they deserve is absolute clarity,” she said. “It needs to be about ‘women first’ and treating them with respect and compassion.”

Asked for an update on the process, RCOG referred the inquiry to the Department of Health, which forwarded it to the HSE.

A small number of women with micro-invasive cervical cancer, which rarely develops into invasive cancer, have been included in the RCOG review.