‘It’s a miracle, what the neurosurgeons do’: Medical staff honoured as heroes 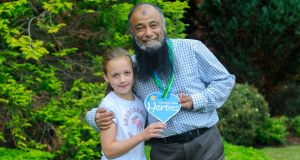 While other children were playing in the snow during the 2018 Beast from the East, nine-year-old Issey Kelly was undergoing surgery at the hands of neurosurgeon Taufiq al-Sattar following a brain haemorrhage.

“We were told the worst-case scenario was the probable scenario,” said her father Ollie Kelly. “We didn’t know what to expect neurologically, physically or anything after the operation.”

“It’s a great result, to go through everything that we did in such a whirlwind – she made her communion just over two months later,” said Mr Kelly. “She’s back running, football, hurling.”

“It’s a miracle... what the neurosurgeons do,” he said. “[Dr] Sattar saved our beautiful daughter’s life, and we will be forever grateful and indebted to him for the rest of our lives.”

He and other colleagues were among those praised at the annual Honour your Heroes Day organised by the Beaumont Hospital Foundation.

Dr al-Sattar had vowed to continue his work as a neurosurgeon after losing his wife and three teenage children in an arson attack in their home in Leicester in 2013, while he worked in Ireland.

Sacha Dekker (46) thanked physiotherapist Róisín Vance, a clinical specialist in neurology, for helping get her “life back” after she was paralysed on her left side following complications during brain surgery for a rare form of epilepsy.

“One of my medical team came to tell me that, based on the last MRI, it was highly unlikely I’d ever walk, work, or live independently again. He handed me a list of assisted-living facilities,” Ms Dekker said.

In 2017, two years after the operation, she walked on the Great Wall of China.

“I still hear your voice all the time when I stand up,” she said to Ms Vance. “When my body didn’t co-operate, when I thought I’d never get my life back, you were there.”

“I don’t think I’ve ever had a patient as driven as Sacha,” said Ms Vance, who has worked as a physiotherapist for 14 years. “Patients like Sacha make it worth the while every day.”

Health-care assistant Natasha Moran was among staff honoured, with Jodie Regazzoli (23), who suffered traumatic injuries after being hit by a car in 2018, describing her as her “mammy in hospital”.

Elaine Muldoon (51) also developed a close relationship with her carers after her illness, a rare nervous-system condition, in 2016 caused her to spend months paralysed in intensive care.

Among the staff she thanked was nurse Siobhán Tierney Pike. Despite not remembering much from her initial months in hospital, she said “I remember the nurse that I honoured today – she did up my room for me, brought me in a little Christmas tree and lights.”

“From where she was, where she couldn’t even open her eyes, to now – it’s just incredible.”

The nurse placed the medal honouring her as a hero around Ms Muldoon’s neck. “She’s just such a remarkable person... I don’t feel I deserve it – she deserves it.”

1 Eyewitness to Auschwitz: ‘We were held in the wagons like animals’
2 Woman’s body most likely dismembered with power tool – murder trial
3 Election 2020: 10 key questions to ask candidates on your doorstep
4 Find out if your local TD is a landlord or owns multiple properties
5 Election 2020: Peter Casey to stand in both Donegal and Dublin West
Real news has value SUBSCRIBE