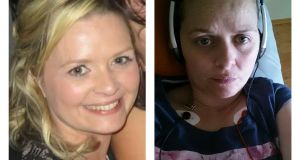 Shirley Moran Breslin was bitten by a tick in 2010.

Some 4½ years later, following numerous tests and debilitating symptoms, she was finally diagnosed with Lyme disease.

Immediately after the bite, the 42-year-old Athlone woman developed the “bull’s eye” rash that is typical of Lyme disease. However, when she was first tested for the condition in Ireland, the results came back negative.

She was then diagnosed with fibromyalgia, but the medication she was prescribed did not improve her condition and she continued to suffer from muscle cramping, insomnia and chronic fatigue. She was eventually retested for Lyme disease in a German laboratory and was diagnosed with the condition.

“This is not a disease that you just get abroad. It’s here, it’s now and it’s very, very real,” she said. “Lyme disease totally and utterly destroys people’s lives. It doesn’t discriminate, whether you’re rich or poor, it affects both adults and children alike.

“Only for help from our families, friends, communities near and far supporting us, I probably wouldn’t be able to walk any more,” she added.

She and her husband, Enda Breslin, had hoped to start a family but when she was diagnosed with this condition they were forced to accept that they could not have children.

“We found out that the disease is transmitted from mother to baby. It’s one thing me being sick, but it’s another thing to pass it onto a baby,” she said.

“We went through all of the emotions. We were angry, and sad, and grieving something that we never had a chance to have. The diagnosis completely changed my life plans.”

Ms Moran Breslin is undergoing treatment in Cyprus, and said she noticed a huge improvement in her quality of life.

The treatment has come at a price, however, with Ms Moran Breslin spending more than €100,000 on tests and medication over the past nine years, most of which has come from fundraising.

“I’m no longer bed-bound, I can actually walk again or pop down to the shops,” she said. “I want to get to a stage in my treatment where my body fights back and the disease goes into remission.”