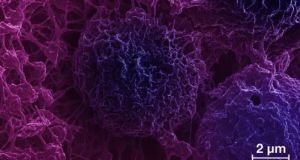 Researchers from Queen’s University Belfast have developed a test that may be able to detect ovarian cancer up to two years earlier than current approaches.

The researchers have discovered that the presence of four proteins together, known as a biomarker panel, indicates the likelihood of epithelial ovarian cancer (EOC).

Using these biomarkers, the researchers then developed a screening test that initial studies suggest may be able to detect ovarian cancer up to two years before current detection tests.

The study, published in the journal Nature, involved the analysis of blood samples from 80 people across a seven-year period.

“Firstly, we discovered that the presence of the biomarker panel will enable us to detect EOC,” said Dr Bobby Graham from the school of biological sciences at Queen’s and lead author of the study.

“We then developed a screening test to detect this biomarker panel, making this a relatively simple diagnostic test.

“The algorithm designed will screen the blood sample and flag any abnormal levels of the proteins associated with the cancer.”

Most ovarian cancers are EOCs, which is a cancer that forms in the tissue covering the ovary.

Cancer of the ovary affects more than 315 women in Ireland each year and is the fifth most common cancer among women.

Ovarian cancer is most common in women who have had the menopause, but it can affect women of any age.

As the symptoms of ovarian cancer can be similar to those of other conditions, it can be difficult to recognise. However, early symptoms may include a pain in the pelvis and lower stomach, persistent bloating and difficulty eating.