Access to water, and lack of it, shapes ecosystem for humans, flora and fauna alike 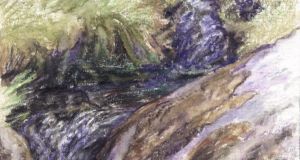 “Like our neighbours, we once depended wholly on the stream, piped to the house by gravity from one of its higher pools.”

The hill stream ducks under an old stone bridge to swerve through a corner of our acre. Flash floods, carving through a layer of ochreous clay, have deepened its bed decade by decade, so that the tangle of fuchsia bushes arching from its banks now hide and muffle its day-to-day passage below.

At the umpteenth day of drought I took binoculars across the road to look at the stream in the open ravine that divides the sheep’s rocky meadow. Down among mossy boulders, a slow gleam showed.

Like our neighbours, we once depended wholly on the stream, piped to the house by gravity from one of its higher pools. Ours needed a tight little dam of rocks and sods to keep water above the pipe’s end. A flood of rain could sweep the dam away; a drought could leave the pipe sucking air.

Either way meant a long trudge up the hill. In summer sun that could be blissful: a big blue sea and chirping wheatears. Backside to the wind, in Paul Durcan’s treasured phrase, it was often more of a penance.

Today we have the luxury of pumped water. With a well drilled down to 240ft (73m – at the deeper range of some 100,000 such wells in the nation), why should I bother if the stream is still running?

It gathers itself in a small stretch of bog in the lap of the ridge. I have seen this, perhaps too breezily, as our upland reservoir. If months of drought dry it up, what then? An accomplished worrier, I choose to discount the endless, squelching abundance of the spring.

I also try to picture what it’s like, down at the well pipe’s end. A big pond full of water, replenished by trickles from above? Or a crevice that will just keep flowing, so long as we don’t flush too often?

In rich ecosystems, such as streams, droughts can have complex effects

The man with the rig, from Donegal and an excellent judge of these things, stopped the remorseless rumble and chatter of the drill when enough of the right-coloured water came gushing up. Then the health people had to test it, or we wouldn’t get a county grant. But no iron, sulphate, arsenic or E coli; just sometimes, in a frosty winter, a bit cold to drink from the tap.

According to the map of The Geology of South Mayo, our hillside wedge of bedrock is “grey-green lithic turbidic sandstones with blue-grey slates with black laminae”. They came from the seabed of the vanished ocean of Iapetus and were fractured and cracked in the big heave into mountains,.

Sandstones, says Wikipedia, are “porous enough to store large quantities [of water], making them valuable aquifers”. One study suggests that “water moves through some sandstone 10,000 times faster than in shale”.

But there’s sandstone and there’s sandstone. The Environmental Protection Agency says: “In contrast with most other EU countries, the bedrock aquifers in Ireland have fissure permeability only.” Water flow, it insists, “is predominantly through fissures or fractures and not through pore spaces in the rock itself”. That’s clearly true of much limestone, but some dense, fine-grained Irish sandstone can also be as hard as steel.

For much of the natural world, meanwhile, the trials of drought are recurrent and familiar. A holiday in Provence once showed me little snails clustered together at the top of tall, dry stems at the roadside. They were aestivating – hibernating, staying dormant – clear of the baking soil and up in the wind.

In rich ecosystems, such as streams, droughts can have complex effects

In much of Ireland, our earthworms have been aestivating (Latin aestes = summer), wrapping their bodies into knots at the bottom of their holes and sealing their chamber with mucus to keep in some humidity. And snails, rather than climbing, work their way into the soil and exude more mucus as protection while they sleep.

Our woodshed swallows are flying overtime to catch midges for their young: a depleted generation is missing, as their eggs dry out in the dwindling of bog pools, marsh and mud. Dragonflies eat midges, too, but exceptional droughts can threaten their own populations of aquatic larvae.

Bats need midges for food, but also night-flying moths. In Britain, which shared with Ireland the three-month summer drought of 1976, the withering of specific wild food plants and loss of caterpillars brought a crash in some species of moths and butterflies.

In rich ecosystems, such as streams, droughts can have complex effects. Studies of hill streams in Scotland and Wales have shown that even when a long drought has killed all the trout, many invertebrates survive in the moist gravel of the streambed. Timing can be critical in deciding what lives and dies, but a couple of years will bring back vagrant mayflies, stoneflies, caddis flies and the rest, along with questing trout, to lay their eggs and colonise.