Gorse fires: ‘We need three or four days of rain to kill this off’

The Air Corps dumped more than 150,000 litres of water on Bray Head during a two-day operation to stop a wildfire that devastated sections of the popular hiking trail. Video: Nick Eogans 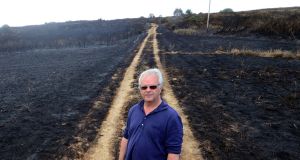 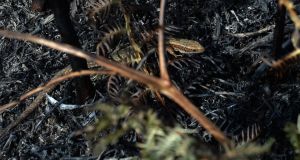 A lizard peeps out of the scorched earth on Bray Head. Photograph: Cyril Byrne

As they returned to Bray Head in Co Wicklow to douse flaring embers and reassure worried residents, Greystones firefighters were on their 88th callout since the heatwave and drought conditions took hold more than a month ago.

“When you think that everything you own is going to go up in flames, it’s pretty scary,” said one resident, looking on as, for the umpteenth time since the blaze took hold last Friday, the part-time firefighters dropped what they were doing and rushed out to help.

The damage of the past four days could have been more severe had it not been for their hard work, and the foresight of Mark Kopik. The landowner, anticipating the inevitable, cut fire breaks through the gorse in the hope that if a fire broke out, he could slow its pace. The goal was achieved.

It progressed across the head and southwards to the Cliff Road, ending in a cul-de-sac overlooking the Irish Sea.

The fire appears to have started late last week at a place known locally as Cable Rock. Locals and firefighters believe it was caused by someone camping at the rock, who lit a fire that then got out of control.

“It spread up the hill and jumped the [Dublin-Rosslare] railway line, burning up and through the Cliff Walk,” said Mr Kopik.

Prior to the blaze really taking hold, he was on the south-facing flank of the head, where he owns some 140 acres, cutting fire breaks through the gorse and other general undergrowth.

He also had a large mobile water tank, the contents of which he used to douse vegetation along the northern side of Cliff Road, where the houses are, hoping to stop any fire reaching the road and also saving the trees that line it.

“That tree over there,” he said on Monday, pointing to a slightly stunted but fully leafed ash, “that was burnt in the fire of the late 1990s and only really recovered this year.”

Because of the special status, controlled burning of gorse to stem the spread of the plant is no longer permitted

All around it, the field was carpeted with a layer of jet-black ash. Further up the hill, gnarled and twisted stalks of gorse had been shorn of greenery and reduced to a low forest of blacken sticks.

Joe Taylor, a local resident, saw the fire progress rapidly on Friday, but recalls the late 1990s fire as more of a threat to his home. “It came right down the hill and crossed the road, setting fire to the trees beside our house,” he said, adding that Friday’s fire progressed “fairly fast” but did not cross the road.

Mr Kopik had no livestock on his land but had done a lot of tree planting and fencing, the replacement of which he estimates will cost “thousands”.

The Brabazon family, owners of the Killruddery Estate, lost some grazing on the top of the head, but otherwise the destruction has been mainly to vegetation.

The head is a Special Area of Conservation, an environmental measure that brings its own problems, according to Mr Kopik, who estimates that 90 per cent of his 140 acres has been burnt.

“The main problem is that the head is an SAC and we’re trying to encourage different wildlife into the area,” he says.

That includes deer (which escaped south as the blaze took hold), rabbits (which had returned this year for the first time in decades, says Mr Kopik), pheasants and other birds, including larks and curlew.

However, because of the special status, controlled burning of gorse to stem the spread of the plant is no longer permitted.

“Over the past 15 years, it’s grown and grown,” said Mr Kopik. “On much of the head, it is 15ft high and impossible to control. Our intention is to put in more native trees to create a native woodland scheme.”

He and all the residents along Cliff Road are full of praise and gratitude for the firefighters for their efforts since Friday.

Shortly after 11am on Monday, a local woman saw flames flare up from a smouldering gorse thicket about 200m up the head in front of her house.

“I could see little pockets of smoke, smouldering away,” said the woman, who asked not to be named. “I saw it flare four, maybe six feet and I thought, ‘Okay, I’m not taking any chances’.”

The fire tender and support tanker were there within minutes. Firefighters ran a hose up the hill, past the bushes and trees kept alive by earlier action, and into the blackened, ash-strewn wasteland, where ESB wooden poles had managed to survive the blaze.

When they got to the smouldering area, they sprayed water over it, killing the thin, wispy plume of rising smoke.

“It’s the roots,” one of the firefighters explained to the woman, “them roots are still burning underground and they’re going to flare at times.”

Another firefighter adds: “It’s going to be like this for a while ... This place needs three or four days of good rain to kill this off.”

The woman was reassured. More so than over the weekend when, as the fire surged across the head and crept towards her home, she could hear the cries of animals not as fleet of foot as the deer.