For peat’s sake, our uplands need rain – just not too much at once 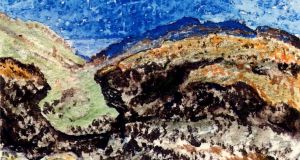 The sun was most welcome at breakfast in a brief, lordly visit to our north-windowed kitchen. Climbing from the ridge through a silvery lattice of vapour trails, it woke good memories of being up on the tops, gazing out to the huge sea and its islands.

Still, the long summer drought and temperatures soaring day by day revived some dour ecological misgivings. For a start, climate change could cost Ireland a lot of peat-clothed heights, leaving even more ridges and peaks as bald as Donegal’s Errigal and hillwalkers scrambling over scree.

As far back as 1991, studies for the Department of the Environment warned of “gradual shrinkage” and decay of upland blanket bogs, and erosion by intense rainfall. Deterioration of peatlands was seen as “possibly the most deleterious outcome of the climatic scenarios in Ireland” and one “without a technical remedy”.

In autumn 2003 catastrophic landslides at Pollatomish, in northwest Mayo, wrecked homes, bridges and roads as torrential rain, after weeks of drought, slid the peat from the hillside. At Derrybrien, in Co Galway, construction work for a windfarm helped trigger a similar ground failure and launched a brutal river of sludge.

At neither place did overgrazing seem to play a part – at least in findings by the Geological Survey – despite its ravages elsewhere. Nor had the uplands experienced the fires of the destructive kind we’ve seen since. These are changes to the hills’ long history of an entirely natural erosion of peat.

The mountain summits and high plateaux of Ireland’s hills can be savagely weathered places. Rather than the smooth contours suggested by distant views, the peat is often carved into stark, black “hags” – sooty masses, sometimes shoulder-high, separated by glistening gullies and stretches of rain-stripped gravel.

A few centuries of grazing, burning and trampling by people and animals have stepped up erosion, but they were not the first cause. As peat accumulates in wet mountain areas, scars from natural bog flows or the collapse of below-surface pipes open the bog to erosion by lashing rain and wind.

On the tops there is no protection from any quarter. Farther down, the wind, shared between the hillsides, drops in speed. Here begins the deep-rooted vegetation of heather and moorgrass, a tough, closely woven skin to the peat. As water rushes off the high plateaux, plants slow it and soak it up, steering the surplus to streams and waterfalls in the folds of the hillside.

There could still be natural bog bursts at the base of the hills, as heavy rainfall swells a lens of water trapped between different densities of blanket bog. As the lower edge of the bog bursts open, its upper mass of peat is propelled, sometimes for miles, over the land and houses below.

The events of 2003 prompted the Geological Survey to set up a database of peat landslides and flows, a lot of them historical. Their number, it reported, had been “grossly underestimated”, probably running into unrecorded thousands. It has also compiled a national map of “susceptible” areas to guide planners and developers. Like risk of floods, landslides have entered national reckoning.

Even less amenable to “technical remedy” is the loss of organic carbon locked up in the fibres of peat. Bogs store three-quarters of Ireland’s soil carbon, and every disturbance loses CO2 to the atmosphere. Summer drought and heat accelerate the loss, downpours wash away peat particles, and no new moss grows to repair the surface. The very substance of the uplands slowly melts away, together with its microbes, insects and heather, its animals and nesting birds.

The wear on vegetation by decades of overgrazing has been slow to heal. It has opened the hills to the bite of fire, no longer just sweeping the surface but searing deep into desiccated peat.

Globally, Indonesia has seen dramatic peatland fires, caused by clearance for new palm-oil plantations. They have shrouded cities in their smoke and released an estimated billion tonnes of carbon into the atmosphere.

Nearer home, severe fires after a dry summer in 1976 burned deeply into some 600 hectares of heather-covered moorland in North Yorkshire. The ashy surface was still bare of heather eight years later. A University of Leeds study tested moorland burning in the Pennines and showed fires driving down the peatland water table, leaving the surface to dry out and degrade .

There were 40 major fires in the State in May 2017, mostly deliberately set and destroying forestry, peatland plants and wildlife from Donegal to Cork. Northern Ireland’s fire service dealt with 500 more.

Recent days have seen even fiercer moorland and woodland fires in Lancashire. As I write, the red alert for forest fires in Ireland seems to have held in check the worst pyromaniac impulses. Prayers for rain may elicit some response – if not, one must hope, too torrentially at once.