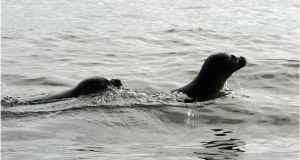 In spite of its name, the common (or harbour) seal is rarer than the larger grey seals in Irish waters nowadays. Rarely found together, common seals can be spotted in estuaries and sand banks whereas grey seals are usually seen in the open water around the Irish coastline. Grey seals are also more likely to remain upright and motionless in the sea to have a good look around them.

Common seals sometimes travel up the larger rivers and spend time in lakes. When on land, common seals often take on a head-up tail-up posture which looks a little like a banana. Mating takes place between mid-August and early October although amazingly, development of the foetus doesn’t begin until October (when there are less than 12 daylight hours). Female common seals give birth to their single pups in June or July in shallow water or on land. The pups can swim and dive from birth. Strangford Lough, Co Down, Glengarriff, Co Cork, Galway, Donegal and Clew Bay are good places to spot common seals. They should not be disturbed, especially when the females are feeding their pups.