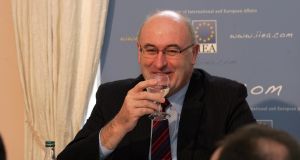 Then minister for the environment Phil Hogan at an Institute of International and European Affairs conference entitled Taking the Plunge: A New Era in Irish Water Management, in 2011. Photograph: Eric Luke

Autumn 2013: The process of placing meters in properties begins.

January 2014: Controversy emerges over the costs, including bonuses and levels of pay. An Oireachtas Committee hears €180 million in start-up finance was approved, much of which would be spent on consultants.

April 2014: Residents in Cork and Dublin housing estates continue to prevent the installation of water meters outside their homes. Similar campaigns follow.

October 2014: About 100,000 people participate in water protests, the regularity of which would form a central part in the eventual scrapping of charges.

October 2015: Irish Water expects 80 per cent of households to pay future water bills despite a compliance rate of about 51 per cent.

March 2016: Irish Water denies any mass cancellation of payments in the wake of the general election, during which the controversial charges are a central voter issue.

April 2016: Minister for health Leo Varadkar says the suspension of water charges is wrong and not in the public interest.

May 2016: Fine Gael and Fianna Fáil reach agreement on the formation of a minority government. The deal includes the suspension of water charges within six weeks of a new government taking office, lasting for at least nine months.

May 2016: The installation of water meters is to be reviewed. To date, approximately 820,000 of 1.05 million meters have been installed, costing more than €500 million.

July 2016: Irish Water experiences a decline in revenue of nearly 50 per cent following the suspension of charges.

November 2016: The final report of the Expert Commission on Domestic Public Water Services questions the rollout of water meters and says a referendum enshrining Irish Water in public ownership should be considered. It says normal water usage should be funded by general taxation.

March 2017: Fine Gael and Fianna Fáil remain deadlocked in a dispute over charges and the issue or excessive use payment.

April 2017: The billing regime is formally abolished when the Dáil accepts the findings of a controversial report by the Oireachtas committee on water charges by 96 votes to 48.

November 2017: Legislation is passed to allow for refunds. Some 180,000 cheques are processed in the first week.

July 2018: Plans emerge for Irish Water to be separated from Ervia.