Michael Viney: The cliffs of Ireland are the island’s last wild land, the views enchanting tourists on the Wild Atlantic Way 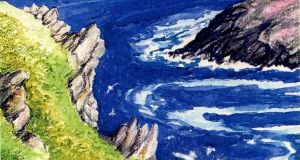 “The view from the top balcony can be sublime.” Illustration: Michael Viney

A good many of the high points in my life have perched me, appropriately, on clifftops. Prostrate among island sea pinks above seals and wheeling seabirds, or crouched among Arctic rocks to watch polar bears parading on the frozen fiord below, the view from the top balcony can be sublime.

With or without wildlife, the view is what enchants summer tourists on the Wild Atlantic Way. On TripAdvisor, some hundreds of visitors to Donegal’s Slieve League have been ecstatic. “Dramatic scenery, history, elemental nature, and the freshest air in all the world. Powerful!” sets the tone.

We oldies, of course, remember Slieve League before the fenced viewing platform, the shuttle bus up from the visitor centre, the car parks and craft shop, the ice cream van and “yummy” lobster rolls at the top. Clutching each other, well back from the edge, 600m above the sea, we muttered “Oh my God!” into the wind long before that cry went acronymic and digital.

Together with the seashore between the tides, the cliffs of Ireland are the island’s last wild – or “least modified” – land. Hard and metamorphic at its storm-lashed western rim, soft and crumbly in glacial boulder clay, they make up a fifth of the coastline.

All of them qualify for periodic monitoring as “EU Annex 1 habitat Vegetated sea cliffs of the Atlantic and Baltic coasts” under Europe’s nature directives. Peering up through binoculars from boats or tidal shores, lowered (exceptionally) on ropes, or peering at good helicopter and telephoto images, a team of botanists has done its best to identify and map what’s growing at almost 200 locations, 32 of them surveyed in person (see Irish Wildlife Manual No 53 at npws.ie)

Most are at least partly within NPWS conservation sites, offering some clout against rubbish tips and car dumps (a special temptation on islands) or misplaced rock armour at the base.

A more natural “threat” is invasion by alien plants, such as gunnera, cotoneaster, escaped garden hebe and silvery ragwort, all documented in the NPWS survey. Native vegetation begins with the black skirt of lichen at the splash zone of Atlantic cliffs and a progression of salt-resistant plants to the windy fringe above.

At every crevice and ledge, flowering cushions of sea pink are the most frequent plants, but surveys with ropes found more than twice as many species as could be spotted in remote photographs, filling in the plantains, wild thyme, mosses and lichens.

The tallest cliff in the survey was at Achill’s Slievemore (660m to 670m), and the longest stretch centred at Glinsk on the north Mayo coast. This offers a remarkable 68km of swoops and crags, historical haunt of golden and sea eagles.

The stiff-winged fulmar was noted as the commonest breeding seabird. Since it first arrived in Mayo in 1911, the fulmar’s coast-wide spread and assiduous trawler-stalking have helped keep its population relatively secure, though the falling numbers of young fulmars echo a wider seabird decline.

Among the thousands of birds lining the ledges of island and mainland cliffs, the most exposed positions are taken by the guillemot. Dispensing with a nest, it relies on the conical (pyriform) shape to its egg to stop it rolling off. A coating of sticky guano also helps, but accidents happen and starfish swarm to an eggy, seabed banquet at the foot of some cliffs in Kerry.

The clamour of the bird colonies peaks in early summer and begins to quieten down this month as partly-grown chicks flutter down to the sea, paddle feet splayed, and shepherded by a parent. This happens at dusk in failing light to avoid the beaks of great black-backed gulls and skuas.

Puffins are mostly gone in a rapid desertion in August. The single chick has been fed by both parents, flying back to the burrow among clifftop sea pinks with their notched bills lined – ideally – with sandeels.

An international study, led by Oxford University and involving UCC scientists, tracked the journeys of 270 puffins from a wide range of breeding grounds around the Atlantic to feed in winter on shoals of oil-rich capelin off North America.

Irish birds, taking a circuitous route, made the longest journeys – up to 4,700km there and back. They arrive to breed at our cliffs so exhausted that they lay only one egg and struggle to feed the chick. So suggests the study published in Current Biology and reported fully at https://iti.ms/2J6yN9z. All the more reason, says study co-author Mark Jessopp of UCC, to care for the puffins we’ve got.