Another Life: The weeping beech is the largest growing of all hardy weeping trees 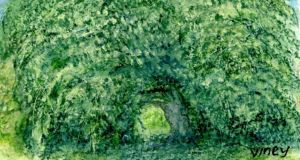 Weeping beech: We found a drift of self-sown beech seedlings, a few inches high, and pocketed one for the garden. Illustration: Michael Viney

The summer storm swept past in a hectic swirl of branches and I looked out at dawn to a polytunnel plastered with torn, wet leaves. But even on this bare hillside, so open to sea winds, our motley spinney stood firm. I am awed again by its billowing growth, nourished on extra breaths of CO2.

The deeper greening of the planet, confirmed by scientific satellite, has encouraged much online enthusiasm. Even one large tree, I read, “strategically placed in a yard, can replace 10 room-size air conditioners operating 20 hours per day”.

That would fit the beech beyond our window, now with an extra metre to its arching twigs and dwarfing everything around it in a great, green crinoline of leaves. But as a specimen of Fagus sylvatica, it may have a problem of identity.

A tree can take a few years to show you the shape it means to be. Almost 30 years ago, wandering through the old demesne forest at Cong, we found a drift of self-sown beech seedlings, a few inches high, and pocketed one for the garden. A slow ascension in a sheltered corner brought its head up into the wind, green as a lettuce in May, fiery in the winter sun.

Ten years later, at about 2.5m tall, its new growth surprised me. Instead of reaching for the sky, its slender twigs arched gracefully earthwards, a first hint that, rather than the common European beech, we might have adopted Fagus sylvatica pendula. Or are the branches just waiting to be hoisted aloft as the trunk piles on height and muscle?

Instead of reaching for the sky, its slender twigs arched gracefully earthwards

The weeping beech is the largest growing of all hardy weeping trees, reaching 25m or so (not on this hillside, it won’t). That’s long after a weeping willow has grown up and decayed.

At Florencecourt, Co Fermanagh, there are “immense, round-topped specimens” of the weeping beech, along with the original wild yew, fastigiate freak from the nearby Cuilcagh mountainside and cloned for the sombre, columnar yews of churchyards.

Half a dozen other Irish demesnes in the midlands count weeping beeches among their prized trees, and the named cultivars of beeches on old Irish estates run into some 25 variations of form, purple-leaved, columnar or absolutely twisted (“Tortuosa”).

Moreover, England’s Kew Gardens have a remarkable walking beech, which is advancing outwards because its branches have rooted down and become a ring of young trees where they struck the ground.

Our tree lacks the authentic, perpendicular droop and seems unlikely to start walking anywhere. It may be just feeling down at its singularity and windy exposure than actually wanting to weep (“even to a casual observer,” writes botanist Charles Nelson, “several different habits are obvious”). The arch of its branches does, at least, still admit me to its shade to offer the trunk a hug.

Beech was typically a “big house” tree, but happily accepted by the surrounding populace as occasional “pin trees”, studded with pins and nails (later with hammered coins) in pagan, tree-worshipping rituals. But it never became a native.

Beech was happily accepted by the surrounding populace as occasional “pin trees”, studded with pins and nails (later with hammered coins) in pagan, tree-worshipping rituals

“Some modern ecologists,” Thomas Pakenham has noted, “advocate a kind of ethnic cleansing in which naturalised species, such as beech, are systematically hunted down and destroyed.”

He might have been referring to some of those devoted to restoring and extending Ireland’s native woodlands, many in the remnants of ascendancy estates.

In Management Guidelines for Ireland’s Native Woodlands, published last year by the National Parks and Wildlife Service and the Forest Service, the beech is joining sycamore, lodgepole pine and rhododendron as an “invasive alien”.

Authors John Cross and Kevin Collins point to its dense, dark shade and prolific seedling-scatter as a threat to the ground layer of woodland plants and the regeneration of native trees. Their advice is to “pluck out” beech seedlings in winter months, their identity marked by the obstinate, golden curl of their leaves.

A national survey of native woodlands found beech in 69 per cent of them. But the guidelines are far from absolute in wanting them gone, if “mother trees” among them are doing no great harm. Indeed, their shade can help foster the growth of yews. And mature, even venerable, beeches have a value to the natural world quite independent of their beauty.

At Clonbur Woods, for example, on the limestone shore of Lough Mask on the Mayo/Galway border, a restoration by Coillte has left some stands of beeches intact. Planted originally as part of the Guinness estate, part of their role in biodiversity is to offer a home for the birds-nest orchid, Neotinia nidus-avis.

It is a somewhat charmless waif among orchids, and its flowers are a pallid, yellowish-brown, and nectarless. Its leafless and parasitic growth depends on digesting a fungus that is part of the network of underground mycorrhizae that helps to feed the beech’s roots. The plant is also rare, protected and declining, with no duty to be beautiful.