Michael Viney: In 1989, decades before David Attenborough’s ‘Blue Planet 11’, I wrote a column for this newspaper on the threat of plastic to marine life 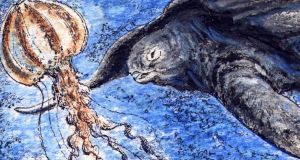 For a leatherback turtle, a jellyfish or a plastic bag? Illustration: Michael Viney

In the early autumn of 1989, a marine biologist friend joined me for a walk on the strand. To measure almost 30 years, Minister for Health Simon Harris was three years old and I was still riding my bike to the post office to mail “Another Life” to The Irish Times, together with its black-and-white, pen-and-ink drawing, unscanned.

My friend was Dr Dan Minchin, an international expert on living marine invaders (the zebra mussel, for one), and at the time concerned about the many shapes of plastic in the sea.

The night before, he had shown me how light-sticks worked: bending one until its chemicals mixed, to glow as a once-off lure to fishery long-lines off the American coast. Discarded in hundreds, they drifted east. (I had thought they were something veterinarian.)

Even 30 years ago, the more immediate threats of plastic were widely known

At the tideline, Dan bent to rummage in the seaweed and sort out a palmful of pellets, flattened beads no bigger than fish eggs. Raw material of global plastic manufacture, they are spilled in wrecks and quayside accidents and hosed into sewers and rivers. I had not yet learned to call them by their silly name, “nurdles”, or even knew they existed.

They were, as I wrote in my next column, called “The plastic peril in the sea”, accumulating indestructibly on beaches from New Zealand to remote corners of the Arctic. “They have been found floating on the Atlantic at 3,500 per square kilometre; they drift like confetti from California to Japan.”

I was wrong about their indestructability – molecules of plastics just take time to disengage. As NUI Galway reported this year, microplastic particles now even permeate the guts of the ‘mesopelagic” fish. These migrate in huge numbers from a daytime spent in deeper, twilit sea to feed on plankton at the surface by night, a lifestyle that helps transfer carbon to the seabed.

Even 30 years ago, the more immediate threats of plastic were widely known. “Plastic six-pack rings,” my column continued,” are throttling birds and maiming fish; plastic balloons released en masse for charity are ultimately swallowed as ‘jellyfish’; polystyrene foam cups disintegrate into granules that turn up in impacted crops and stomachs of seabirds.”

These tolls on sea life had thus been documented decades before Blue Planet II, David Attenborough’s recent and thrilling television series. This touched the fuse of public outrage by putting pictures on facts such as those I recorded in 1989: “Of 15 leatherback turtles found washed ashore dead in one fortnight on Long Island, 11 had plastic bags blocking their stomach openings.”

A recent photograph in this newspaper also spoke for a lot of words. It showed the huge breeding colony of 70,000 gannets on Little Skellig, their nests tangled with lengths of polypropylene cord. On Scottish and Irish islands, too, puffins fly in to feed nurdles to their chicks.

The world is beginning to do things now – some of the world, anyway. Plastic bags are going, coffee beakers are changing, some flying balloons are “biodegradable” because their latex rots “as fast as oak leaves” (about four years). Some single-use plastic is on its way out, or recyclable . . . not bad for a mere 30 years or so of human history and education from TV.

There are times in my research when I’m struck by the surreal and accelerating mismatch of local effort and global trends.

Writing about the Killarney fern last week, I told of botanists counting fronds in the plant’s mountain hideaways to monitor this rare plant’s survival. Very few people will ever see it in the wild – indeed, they must not be helped to do so, such was the devastating precedent of collection in the days of Victorian “fern mania”.

So the counting of fronds goes on, once every six years to satisfy an EU habitats directive. At least 10,000 of the world’s wild species are extinguished every year, while the population of homo sapiens heads for 11 billion by the end of the century.

That’s if climate change permits. A folder called “Doom” on my desktop collects significant prognostications. I note, for example, that the vital flow of the Gulf Stream is at its weakest ever recorded, adding the chance of Labradorian winters to the rise in Atlantic storms.

So does another wise old man: Mayer Hillman, respected UK social scientist and policy wonk. Now 86 and still riding his bike, he cheerfully agrees that humanity is doomed, recently telling a university audience: “I’m not going to write anymore because there’s nothing more to be said.”

I know the feeling.