Covanta may seek leave to burn an additional 90,000 tonnes annually at Poolbeg 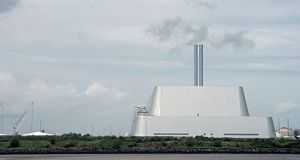 The operators of Dublin’s Poolbeg incinerator are seeking talks with An Bord Pleanála on the potential to burn an additional 90,000 tonnes of waste annually at the plant.

The incinerator, which opened last year is licensed to burn 600,000 tonnes of waste each year, under the terms of its planning permission granted by the board in 2007.

In the months before it opened its operators, US waste firm Covanta, said it had already secured contracts with waste collectors to take 540,000 tonnes of waste . Last December it announced the plant was operating at “full capacity”.

Covanta, trading as Dublin Waste to Energy Limited, has now sought “pre-application consultations” with the board for a “proposed amendment to increase the annual capacity of existing waste to energy facility by 90,000 tonnes” – a 15 per cent increase on its current capacity

A spokeswoman for the firm said it was seeking talks with the board to discuss the process for making an application to increase capacity .

“This is to scope out the procedures in the event of a capacity application. Dublin Waste to Energy are always seeking to optimise the performance of the facility and are looking to the future particularly the additional requirements for district heating,” she said.

“ The current licensed annual capacity is 600,000 tonnes. There is no application with An Bord Pleanála at present.”

Joe McCarthy of An Taisce said any increase would push the plant to its design limits.

“There is an upper limit to what the plant can burn based on the furnace capacity. It has to be asked can the plant cope with that increase, is that increase warranted and what impact would it have on the citizens of Dublin. I would be very worried about that,” he said.

Mr McCarthy said he was “ disappointed but not surprised” that Covanta was considering the increase.

“It is a classic big business incineration tactic – get what you can passed the planning permission stage and then go back looking for more. If Dublin reaches its recycling targets in the next five years it will produce less than 200,000 tonnes of residual waste annually, where is all that extra waste going to come from?”

“Our worst fears from the beginning of this whole enterprise was that this incinerator would keep growing into a monster. It was meant to fill the gap between what we could sustainably recycle and what was going to landfill. What I believe is happening is that it’s gearing up to import waste from other countries, not just to deal with our residual waste.”

The spokeswoman for the company said any extra waste would be received from the facility’s “existing customer base”.

“This incinerator was in the planning for how many years and no one mentioned the possibility of a further increase,” he said. His party would oppose any application for an increase, he added.