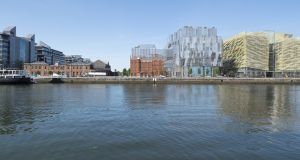 Impression of the Salesforce tower – to the immediate left of the Central Bank’s docklands headquarters.

The High Court has quashed An Bord Pleanála’s decision to approve developer Johnny Ronan’s 13-storey tower beside Salesforce’s Dublin docklands headquarters, in a landmark decision for the planning system.

Dublin City Council had taken judicial review proceedings in what was its first legal challenge to a grant of planning permission by the board.

Mr Ronan has described the outcome as “perverse”, but the council said it took the action to preserve the integrity of the planning process.

The board last December granted Ronan Group Real Estate (RGRE) permission for almost 550 apartments and co-living units in blocks up to 13 storeys, against the recommendation of its inspector.

The site is in a Strategic Development Zone (SDZ), with heights set at five to seven storeys. The council has applied to the board to amend the SDZ, which would increase height on the site to 12 storeys. However, the board has yet to make a decision on this application.

The board on Thursday consented in the High Court to the quashing of its decision, which will now be returned to it for a fresh determination.

RGRE said construction of homes now had to stop. “People have a right to expect better from Dublin City Council, and the planning process,” it said.

City planner John O’Hara said city councillors, the public and landowners developed the SDZ. “The city council was very reluctant to take judicial review proceedings but the SDZ is a democratically made plan and it was essential to ensure the integrity of the plan-making process was maintained.”