City farming: ‘No Dub is more than a couple of generations from the land’ 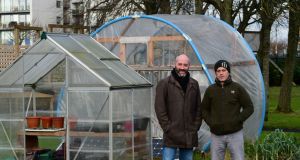 “Every time I see that patch of land, it screams ‘farm’ to me,” says Stephen Hayden.

If you had just met him, you might think he was a bit touched. He is looking at a vacant site, where the Joseph Plunkett Tower – the last of Ballymun’s failed apartment blocks to be demolished – once stood. Not exactly where you expect to imagine an agricultural idyll.

But if you had spent a couple of hours walking the area with him, and meeting a dozen other locals who share his passion for the Ballymun City Farm Project, you might begin seeing visions of flourishing livestock and cultivation on this monotonous grass desert yourself.

Hayden, like many Ballymun natives, believes that the area’s regeneration plan, while it has brought greatly improved housing to the area, was crippled by the 2008 crash, and has not recovered yet.

Troubled as Ballymun had often been, everyone I speak to recalls a lively village atmosphere, now vanished, around the old shopping centre.

This area was cleared, but plans to rebuild the heart of the community were largely shelved. It was the price Ballymun paid for bailing out the bondholders. The farm project is an ambitious effort to restore that heart, and get it beating again.

Hayden is a civil servant, but he has a background in horticulture. He has given many classes in the nearby Meakstown allotments, and in the very successful community garden, Muck and Magic, still right on the main road through the old part of the town.

Meanwhile, Michael Keating, bus driver, fellow gardener, and photographer, had set up the Ballymun Wildlife Facebook group, where he and other members celebrate the remarkable plant, bird and animal life in and around the area.

They and others formed a committee, chaired by Hayden, to promote green infrastructure in the area. A proposal to establish another community garden failed, but this set-back engendered the much more adventurous plan to set up a “city farm”.

The group was inspired by the success of city farms in the UK, especially their role in areas of acute social deprivation. Research shows that urban agriculture brings remarkable health and wellbeing benefits to local communities. It also often attracts thousands of visitors to places that previously had a very negative image with outsiders.

People take ownership of something like this, given the right opportunity

Hayden and his colleagues argue that the farm project fills in gaps already identified by the council in its local area plan and retail study: “The retail study identified several of the weaknesses in the area impacting on social and economic regeneration,” says Hayden.

“Our approach was to identify the various strengths in the area and match them with the city council’s own view of what can be achieved through green infrastructure.

“The regeneration project has been ongoing for 22 years now without having achieved any real economic regeneration in the area,” he believes. This is despite the investment of almost €1 billion since 1998.

“As local residents we want to contribute to achieving the social and economic regeneration of our community and we believe that a city farm can contribute.”

The council agreed to fund research on the farm project. Innovate Dublin Communities produced a detailed blueprint in February 2019. The committee has now canvassed more than 40 local groups, from housing co-ops to disability support networks, from nursery schools to craft groups, as well as public representatives across the political spectrum.

Hayden says almost everyone has been supportive. And one section of the farm already exists, but in a different place. Muck and Magic’s current site will soon vanish under new housing.

Its organisers have agreed to move lock, stock and barrel to the farm if the project gets a green light. Hayden hopes to have a decision from the council shortly.

Hayden points out that the Ballymun farm, unlike the one recently opened in St Anne’s park, Raheny, will sit in the midst of dense housing

The project is strongly rooted in a sense of the area’s history. “No Dub is more than a couple of generations from the land,” says Hayden. Keating remembers doing summer jobs on a farm on the edge of old Ballymun as a teenager. The neighbouring DCU campus was a national agricultural college for many decades.

Kids in the area still have a fascination with horses, and it irks Hayden that this is often seen as a problem. “Children in Castleknock have stables and go horse-riding, and everyone thinks that is grand,” he says dryly.

He recently planted a small, bee-friendly biodiversity patch in the middle of a dull green space beside a community centre. Local children almost mobbed him to be allowed to help dig, plant and fence it. Contrary to the common assumption that everything new and unprotected gets vandalised in troubled areas, the patch remains intact, and litter free, a year later.

“People take ownership of something like this, given the right opportunity.”

“I think, Hayden says, “that access to a farm with animals and plants will break down the disconnect between urban children and the food they eat.”

Keating stresses that the farm will be ringed by a nature walk, so that the farm offers access to native plants and birds as well as to agricultural crops, pigs, sheep and cattle. Our few and threatened native breeds will feature among the farm animals.

Hayden points out that the Ballymun farm, unlike the one recently opened in St Anne’s park, Raheny, will sit in the midst of dense housing. According to the blueprint, new homes will back directly onto the farm. He says these houses will be in high demand, as they will have green space and animals just over their back walls.

The plan also highlights the potential for the myriad patrons of Ikea to consider visiting Ballymun as a break from shopping.

Ballymun centre already has the Axis Theatre, and the remarkable Rediscovery Centre for the Circular Economy. But outsiders usually “parachute” in and out of these venues. The hope is that the farm will provide a magnet to keep people in the area a little longer, spending time (and money) locally.

Hayden also believes that the farm could be a vital link between an extended Santry greenway and the nearby green hubs of the National Botanic Gardens and Glasnevin Cemetery and Museum.

That’s certainly an attractive and different vision for Dublin’s much maligned north side. But for Hayden and Keating, their core mission is provide a lively green outdoor space where their neighbours can walk, meet, and socialise, while learning about food production and wildlife.

Voices from the community

Women from the Sillogue Neighbourhood Centre Craft and Chat group tell The Irish Times about their hopes for the Ballymun Farm Project:

“The farm will make parents more secure in giving their children freedom; it will mean you can bring your children to a safe place where they can still go a bit wild.”

“I’d love my grandson to get the chance to bucket-feed a calf.”

“It will give kids who are not academic a chance to see that they can learn, and enjoying learning, doing practical things, like horticulture.”

“My dad was a dairy farmer, he would have loved to see this opportunity for his grandchildren to re-connect with his way of life.”

“As a non-driver, and with buses so expensive, it would be wonderful to have a place where we can bring local children that’s in walking distance of their homes.”

“There’s nowhere for people to meet here now except the local Spar. The farm café will be very important as a social centre.”

“It will make us a village again.”