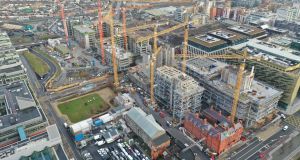 Construction has already begun on the development at Spencer Dock, but according to a statement from the company it will now have to cease.

In the on-going multi-storey War of the Docklands, Dublin City Council has won the latest and possibly most significant battle yet.

On his third attempt, after being slapped down by the council both through the planning process and the courts, developer Johnny Ronan last year secured permission from An Bord Pleanála for his 13-storey residential tower at Spencer Dock beside Salesforce’s new European headquarters.

In an unprecedented move, and one which city planner John O’Hara said he regretted having to make, the council took Judicial Review proceedings against the board’s decision. The board on Thursday told the court it would not contest the case. The court quashed the board’s decision, and gave it six weeks to issue a new one.

The issue at play was that Mr Ronan’s site is within a Strategic Development Zone (SDZ). The SDZ planning scheme sets a range of uses, and of heights, for different landbanks. While this restricts landowners in what they can do with their lands, it also affords them the security of knowing that, as long as they comply with the terms of the SDZ scheme, their application will secure permission.

On the site in question the council set heights of between five and seven storeys for commercial/residential development. Mr Ronan was granted permission by the council in 2018 for apartments and an apart-hotel up to seven storeys tall.

However, later that year Minister for Housing Eoghan Murphy issued new height guidelines, effectively removing caps on the height, and Mr Ronan decided to ask the council to allow him build up to 13 storeys.

The council said no. It argued the Minister’s height guidelines required the council to “carry out a review” to ensure those guidelines were “reflected” in the SDZ scheme.

Mr Ronan took the council to court, last May he lost. The council, just a few days later, submitted its review of heights in the SDZ to An Bord Pleanála. The council recommended the heights on this particular site be six - 10 storeys residential with the potential for two 12 storey “landmark” buildings.

An Bord Pleanála has yet to make a decision on the council’s SDZ amendments.

Nevertheless. Mr Ronan, following his court defeat last May made an application directly to the board under the Strategic Housing Development (SHD) process for his 13 storeys, removing the apart-hotel element in favour of a co-living block to qualify for SHD designation which allows applications for large scale residential developments to be made directly to the board, by-passing the council.

The board’s inspector Stephen Rhys Thomas last November recommended refusal. He said the current height limits of five-seven storeys still applied until the board issued its decision on the SDZ amendments.

“I see no value in second guessing what the outcome of this process might be, and it would be imprudent to advise the Board to make a positive decision on this planning application in advance of deciding the outcome of the Planning Scheme amendment process.

In short, I find the proposed development premature pending the outcome of this formal amendment process. Permission should be refused for this reason alone,” he said.

However, the board granted permission, and it is this decision that was the subject of the judicial review.

The council’s action was against the board, not the developer, but of course Mr Ronan and his residential scheme are the collateral damage. He’s not taking it well.

It was, according to a statement from his company “a perverse outcome” which meant construction work would have to cease.

“This will delay delivery of 548 badly needed residential units, including 47 social housing units, in the middle of a housing crisis.”

The statement added: “People have a right to expect better from Dublin City Council, and the planning process.”

From the council’s point of view it might appear to be a rather short hill to be willing to die on, given its intention is to allow 12 storeys – pending the board’s approval – and Mr Ronan wants 13, but according to Mr O’Hara, a principle of democracy was at stake.

“The city council was very reluctant to take judicial review proceedings but the SDZ is a democratically made plan and it was essential to ensure the integrity of the plan making process was maintained.”