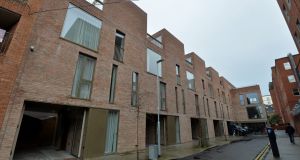 The company behind five holiday rental houses in Dublin city, valued at more than €1 million each, is to appeal a decision banning their use for short-term let accommodation.

The company is one of 16 applicants to seek permission from the city council to use houses and apartments for short-term let accommodation, since restrictions on the use of homes for Airbnb-style rental were introduced last July. The council has not granted permission in any of the 16 cases.

Last June, a month before the short-let legislation came into force, the council had ruled that the five houses did not need planning permission for holiday letting. However, this was appealed to An Bord Pleanála, which determined a planning application was required.

Representatives of the company said the developer Ddsis Homes Ltd had constructed the houses with a view to sale, but when completed in 2017 and placed on the market, none were sold.

“Facing extreme financial hardship as a result”, the developer “had no choice” but to offer them for short-term letting, the respresentatives said.

Due to the cost of the apartments, they were “not the kind of rental accommodation which could be relevant to the majority of victims of the housing crisis”, which the short-term let legislation was trying to protect, they said.

However, residents in the short cul-de-sac said up to 50 guests were being accommodated in the five houses at weekends. The guests included hen and stag parties, many of which were “loud, noisy and disruptive”, residents Alvaro and Sandra Lopez-Lagua said.

“For example our family had to see semi-naked guests walking down the street, people urinating on the street, cans and glasses being thrown form the roof-top terraces of the units.”

The houses had been marketed for short-term rental as the Phil Lynott Suite, John Fitzgerald Suite, Samuel Beckett Suite, Michael Collins Suite, and Bobby Sands Suite, with prices starting at about €350 a night.

The council said allowing the short-term rental to continue would “result in the loss of five long term residential dwellings, which is of concern to the planning authority having regard to the existing housing shortage currently experienced within the city”.

The proposal would also “result in an unwanted precedent for similar type development in the area, which may then result in the further unacceptable loss of existing long-term residential rental properties in the locality”.

However, the council said it was its policy to “refuse planning permission for any development which would result in the loss of permanent residential units”.

A spokesman for Airbnb said it wanted to “work with Ireland to make its home sharing rules work”.