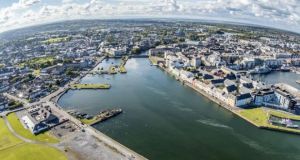 Andrew Archer, project director, said private car users are projected to account for 69 per cent of all journeys in the city in 2039, if the ring road is built. File photograph: Getty

The construction of a proposed ring road to serve Galway City will have “significant residual effects” on bat species as well as local populations of peregrine falcons.

Speaking at the second day of An Bord Pleanála’s oral hearing into the N6 Galway City Ring Road on Wednesday the development’s lead ecologist, Aebhín Cawley, said that these effects cannot be fully addressed by mitigation measures.

Ms Cawley also said the ring road will have a negative impact on active blanket bogs and limestone pavement in the area but these effects can be mitigated by the creation of new dry heath habitats and calcareous grassland habitats.

The hearing was also told that there will be a decrease in the percentage of people walking, cycling and using public transport in the city for the foreseeable future, according to the project’s own Environmental Impact Assessment Report (EIAR).

Andrew Archer, project director, said private car users are projected to account for 69 per cent of all journeys in the city in 2039, if the ring road is built.

According to projections completed by Transport Infrastructure Ireland (TII), which appear in the ring road’s EIAR, the percentage of people walking in Galway will fall from an estimated 25.2 per cent to 24.5 per cent over the same period, should the project go ahead.

The project team behind the proposed ring road argued that these projections will be changed significantly if separate initiatives included in the Galway Transport Strategy and the National Planning Framework are implemented in full.

Despite the projected decrease in the percentage of people cycling, walking and using public transport if the ring road is build, Mr Archer said the development will create an improved environment for non-car users in Galway.

“The introduction of the proposed road development will lead to a considerable reduction in congestion and delay in Galway City,” he said.

“These changed travel patterns will result in significant positive impacts, including creating a favourable environment for sustainable travel by removing traffic volumes, notable HGVs, from the city centre, reducing harmful emissions in the city centre by up to 16 per cent and a 10 per cent improvement in public transport journey times.”

Mr Archer also said that even a vast increase in the capacity of public transport in Galway City, including the development of a long muted light rail system, would not solve traffic problems in the city.