‘All these hotels go up and what do we get back? Nothing’ 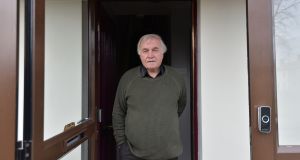 Lesley Curtis has lived in Dublin’s Liberties for half a century, and, for most of the time he has called the place home, he has been able to see Dublin’s two Protestant cathedrals from his doorstep.

Today he can see neither Christchurch nor St Patrick’s, as a dramatic surge in interest in Dublin 8 from tourists, international property investors and local developers has seen derelict sites and long-silent factories give way to student accommodation hubs and shiny new hotels with names globetrotters will easily recognise.

It is not, however, the loss of his views that Curtis objects to most.

“Don’t even talk to me about all the building going on round here,” he says as he stands in his doorway on a cold winter afternoon. “All these hotels are going up and what are we getting back? Nothing. I don’t think they have benefited the local community at all.”

He shakes his head and expresses bewilderment at so much development happening, yet so few homes being built.

“I don’t understand why they can’t build more apartments for people, apartments and homes that people could afford and more social housing for those that can’t afford to buy their own home. That is what we need in this area more than anything else,” he says.

He married in 1970 and has lived in the area ever since.

“It is changing so fast all of a sudden. And because of the so-called gentrification of the area, we are losing what we had. You can’t even park your car here anymore during the day. All of the parking has been taken away from us.”

He shakes his head and draws breath before giving his opinion on the situation.

“And all the hoteliers are out for is money. That’s all they care about. They don’t care about anything else, only the money, and I don’t even think they employ that many local people.”

Rita Fagan is a community activist and long-term resident of a flat in nearby Pimlico. She takes a more pragmatic view of recent developments.

“The way I see it, we are not talking about either/or here, and there are positives and negatives to all the hotel building,” she says.

We need social housing and affordable rental accommodation in the area too, to keep the city centre alive

“Take that new hotel in the Coombe, the Hyatt. They are employing local people and they have done their homework about the area, so they know what it means to local people.”

She does, however, express concern about the dangers of gentrification.

“When that happens, what happens to the local people? A lot of the locals will be gone, and it seems to be happening all of a sudden with all the hotels and student accommodation being built in the area,” she says.

Fagan suggests that all the investment is “well and good, but we need social housing and affordable rental accommodation in the area too, to keep the city centre alive. We are being marginalised in our own town. I live in Pimlico, and the time will come when my area will undergo so-called regeneration too, and then it won’t be long before all the local people are gone.

“There are just so many developments coming on-stream. There is a hotel going up in the Tenters and near Guinness’s,” she says. “The Tivoli is gone, and Francis Street and Thomas Street are both changing so fast, and the real locals are becoming marginalised. In some places the development is being overdone; it is simply too much.”

Fagan says the needs of tourists are being given priority over local people, “who can’t afford to live here any more. The public land in the area should be used for public housing.”

Fagan points out that the people who live in a city are what make it what it is.

“The plain and simple truth is that it is the local people who give a place a character, and if they are all driven out then what do you have left?”

Rebecca Moynihan is a local councillor who grew up in Dublin 8 and she wonders the same thing. She believes it is wrong that land in certain areas of Dublin is being used to develop hotels and short-term accommodation for students, with little or nothing of substance being done to deal with the chronic homelessness crisis.

“I am not saying there should be no hotels, but there needs to be a balanced approach to development,” she argues, adding that the concentration on building hotels and short-term accommodation – largely for students – “is pretty relentless”.

When asked if regeneration and development are better than letting parts of the city stagnate, as has happened in past generations, Moynihan argues that what some people might consider rundown, others might view and bustling and authentic.

She suggests that neighbourhoods such as Thomas Street, Meath Street and Francis Street might look rough at a glance but are in fact “bustling streets with a lot of character that we risk losing. A lot of cities around the world are adopting a cookie-cutter approach to development, and that is leading to a homogenous feel which can rob areas of the character which makes them special and unique.”

She expresses concern about the “over-touristification” of the city. “What we should be aiming for is a city that is good for tourists and for local people.”

She says that when hotels are built planners must first ask if they are being built “on sites that would otherwise have been used for long-term accommodation”.

She says that some of the short-term accommodation that is being built today may not be needed tomorrow – or at least in the years ahead – and may be viewed as too expensive by a future generation of students.

Graham Hickey from the Civic Trust describes the current situation as “tricky” and says that the Liberties, like “so many areas”, was neglected, “with no investment for more than 50 years. When we were surveying Thomas Street 15 years ago, we would never have imagined that, within this timeframe, international investors would be pouring money into it. It is astounding. And it is something we would have welcomed.”

Hickey says that almost every large city in Europe is grappling with a similar phenomenon, because international capital has become so fluid over the past two decades. He suggests that one of the big questions hanging over development in Dublin is whether or not there is an over-concentration of hotels or student accommodation.

Long-term residents here resent the spread of hotels in the neighbourhood, but I actually think it is a good sign

While many Irish developers and local people would have raised a sceptical eyebrow at investing heavily in some of the more run-down areas of Dublin city in times past, international investors have no such qualms, says Hickey. They have proved to be more pragmatic and focused on geographic realities rather that preconceived notions.

They have simply looked at how close certain areas are to the city centre and to areas of historic importance and realised that tourists will be happy to stay there, says Hickey.

But he wonders about the long-term prospects for such developments. “In a climate crisis, is building hotels that rely on air travel a good idea? Hotels here can not easily be converted to long-term accommodation, because the ceilings are too low.”

And, of course, we have been in this neighbourhood before and not long ago. At the height of the boom hotels were going up all over the country as tax breaks and a country apparently awash with money made such investments as safe as houses. But then the crash came and the nation learned what a ghost or zombie hotel was.

Andrew Clarke is not too worried about what might happen to the hotels being built in his neighbourhood in the future.

He is 38 years old and has been living in the Liberties for five years as a renter. He would like to buy a house in the neighbourhood but says he can’t afford to.

“I do know that long-term residents here resent the spread of hotels in the neighbourhood, but I actually think it is a good sign,” he says. “There is more employment in the area and there are more other businesses opening as a result, so there are more restaurants and coffee shops and whatever.”

He accepts that some people view the new developments as hugely problematic.

“I know you could see it as leading to a loss of community, but I don’t really know if that is the case. I do know that if more hotels open that will see property prices here [rise], and I’m already struggling to afford to buy here.

“But it’s great for the tourists to come here in and . . . have a more authentic Dublin experience. At least for now.”