‘Next time we see Queen Elizabeth she might have a knife’ 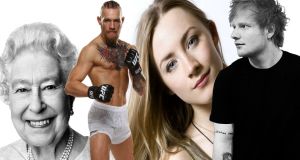 As has been noted by many on Twitter, he feels like a lad we know from school. But he’s actually a lad from Star Wars. “Domhnall” probably isn’t even Irish. It’s probably a space name.

Yet every time we see him in town we nod and say, “Howrye, Domhnall”, and whenever I’m rounding up the old crowd for a drink at Christmas I call him to see if he’d like to join us. “But I don’t know you,” he says, and, “How did you get this number?” Classic Domhnall. Still the same as he was in college. Or possibly Star Wars.

Is the delightfully button-eyed, flappy-headed song-strangler even Irish? It doesn’t matter. Look at pictures of the Battle of Clontarf, O’Connell’s monster meetings, the military council of 1916, the pope’s visit, and who’s there on the sidelines, chortling away like a fleshy Bosco? Why, it’s Ed Sheeran, the eternal spirit of Ireland, singing an awful song about getting the ride in Galway.

[The sound of a phone ringing.] Excuse me for one moment. Fintan is ringing me.

[The sound of distorted, inaudible but animated telephone voice and me going, “Uh-huh . . . Right . . . Okay”. Then silence.] This is embarrassing, but I have just discovered that Conor McGregor is actually a homophobic-slur-uttering, gang-fetishising fighty man. Apologies. I was mixing him up with Michael Lowry.

They’re at it again. The yin to our yang. Oscar to our Felix. Us and the Brits are like the protagonists of a classic romcom, but one from the 1980s that looks disturbing when you watch it nowadays (what with all the religious persecution and starvation and forced migration).

Anyway, the Brits didn’t think about us for ages, remembering the Irish only when they want to go on holidays and need someone to feed the queen. Then Brexit happened.

Now they’re back measuring our windows for new curtains, our ports for new trade deals, and our heads for criminality with phrenological calipers.

It really does feel like the next time we see Queen Elizabeth she might have a knife clamped in her teeth and camouflage make-up on her face.

Meanwhile, even at The Irish Times we’ve taken to singing Four Green Fields every morning, and I’m typing this while draped in the Tricolour and smoking a clay pipe. The Brits. What are they like?

In 2010 a man in the background of an RTÉ news report brained himself on the ice and became a viral sensation. “Who is Man Slips on Ice?” asked a tired nation, desperate for something to believe in. The countryside was scoured for cold, humiliated people with concussion. (This turns out to be 75 per cent of the population.) But Man Slips on Ice never revealed himself. This made us love him even more. “Whither Man Slips on Ice?” we cry to this day. But no one says aloud what we all suspect and fear: that Man Slips on Ice is dead, left to bleed in the snow by RTÉ – who, incidentally, are government shills who hate the common man (slips on ice).

Teresa Mannion in a storm

Are we not all, in a way, Teresa Mannion in a storm?

No Irish lifestyle programme is complete without these shirtless lunks doing handstands and selling pesto. “Oh what happy fools!” I say, gargling pesto, until I flick through the stations and see that they’re on each one – RTÉ, Sky, MTV, even UK Gold – an infinite array of Happy Pears. “How can this be?” I cry, clutching my head in my hands and remembering that I’m allergic to pesto.

I make inquiries and receive a phone call from a disguised voice who arranges to meet in an RTÉ car park. “The truth is,” he says, smoking in shadows, “there are loads of them. They’re kept in an old shed in Greystones. Every time one of them is lost sea swimming during Storm Ophelia, or does a carefree forward roll off a cliff by mistake (this happens a lot), they pull out a replacement.”

“How do you know all this?”

He stifles a sob. “I was one of them,” he says. “But I escaped, underwent surgery to change my appearance, and forged a new life.”

He begins weeping , then attempts a handstand before falling over and into the light. It’s Marty Morrissey, but I vow to redact his name before going to print, for the Happy Pear’s vengeance is terrible. (Note to self: remember to do this.)

It might just be a big rock in the middle of the ocean where mad-bastard monks subsisted on gull’s eggs and Jesus, but we appreciate our own when they do well abroad. “It seems so dignified and wise,” we say the first time Skellig Michael appears on The Graham Norton Show to discuss Star Wars. Soon it’s a fixture on the chatshow circuit, pontificating about the issues of the moment: Brexit, #metoo, the pedestrianisation of Dublin, Cat Person.

Then one day we open Twitter to see it ranting away entitledly about bad service on an intercity train. This is so disappointing. A racist outburst on Celebrity Big Brother is the last straw.

Saoirse Ronan and her detractors

Saoirse Ronan is a hugely talented actor and a good-humoured ambassador for this nation. On the other hand, some people feel there’s something wrong with her accent. The argument is complicated, but, in short: “She should have a different accent. Derp. I’m a man who is threatened by female talent. Deeeerp. I feel like crying all the time, and I don’t know why, so I’m blaming her. Derpy-derp-derp. Derp!”

I think you’ll agree that they make some interesting points and that there are definitely two sides to this discussion.

When Leo Varadkar ascended to the throne he had troubling questions. “Why,” he mused, “did Patrick Pearse not wear novelty socks at the GPO?”, “Why did Michael Collins never coin a hashtag?” and “LOL Michael Davitt TMI WTF? YOLO.”

Look at him there with his roundy head, guzzling a pint of stout like a suckling calf, his chubby paws clasped to the glass like it might be ripped from him at any moment by the Brits (see: the Brits). “He’s just acting like we all feel,” we chuckle. We write “hot takes” about him. “Babies should drink”; “Babies should only drink in moderation”; “Where are the female Pint Babies?”; “Is Pint Baby racist?”

They say each age gets the heroes it deserves. We get Pint Baby.