What does Gabriel Byrne see in George Bernard Shaw?

In ‘My Astonishing Self’, the actor follows shyly in Shaw’s footsteps. But what draws GB to GBS? 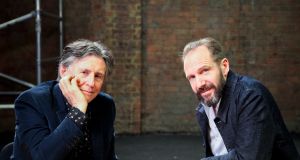 Gabriel Byrne and Ralph Fiennes in ‘My Astonishing Self’

My Astonishing Self (RTÉ1, Wednesday, 9.35pm) is a documentary about the many transformations of George Bernard Shaw, began with the long and slender likeness of his marionette puppet, and ending with an inspection of his gaunt death mask.

Gabriel Byrne, an actor of appropriate gravitas, if not chameleonic ability, fronted proceedings, assisted by interviews with experts and celebrities. This could signal the settling of a new genre of starry cultural appreciation. Last year Bob Geldof gnashed out his enthusiasms for WB Yeats among famous company in A Fanatic Heart, and writer and director Gerry Hoban intimated something significant in the pairing.

Where Geldof would actually shake his fist in begrudging appreciation of Yeats, as though the poet had stolen his line, Byrne on Shaw (or GB on GBS), emphasises his subject’s natural shyness and unlikely celebrity. GBS was a part Shaw created, and one he played reasonably well, which seems as keen a point of kinship as two famous Irish men in celebrity exile.

“Some people have described acting as the shy man’s revenge,” Byrne offers to Shaw’s biographer Sir Michael Holroyd, with his customary quiet gravel, seeming shy even about that.

It’s hard to see what else fires Byrne, who calls Shaw “the forgotten man of Irish literature”. Really? In Dublin he’s pretty hard to avoid, a fixture of two major theatres and the subject of Fintan O’Toole’s new biography, Judging Shaw. By tracing the “shabby genteel poverty” of Shaw’s upbringing, then quickly moving his exploration to London (as Shaw himself did) the thrust of the programme is to present Shaw as a wry and early advocate of self-branding and political scepticism. This certainly has a mark on the show, which interviews Ralph Fiennes, Josie Rourke and Nicholas Hytner, while the pith of contributors such as O’Toole (“There’s the smell of the slum in his nostrils,” he says about Shaw’s early appreciation of inequality) seems to compensate for Shaw’s own indifference to concise arguments.

Tellingly, Byrne identifies most personally with Shaw’s leaving Ireland, describing a “staid, predictable, familiar, grey society I felt I was trapped in”. Elsewhere, he indulges his own projections, such as the confidence he believes Shaw attained, upon losing his virginity, at the age of 29, to his mother’s best friend, despite the pathological chasteness of his later marriage.

Upon discovering his ingeniously revolving writing shed, in Shaw’s Corner, Byrne allows himself a tentative encomium: “He moved with the times, and always towards the light, I think, not to make too heavy a metaphor of it.” In one heedless moment, though, he calls Shaw “a socialist and a social media sensation”. Now, that really does sound like a man ahead of his time.

But Shaw could be controversial even without Twitter, and his progressivism has to be reconciled with his infamous enthusiasm for the efficacy of dictatorship, and particularly for Mussolini and Hitler personally. The programme doesn’t shy from it, but prefers to see Shaw finally as a polemicist stepping too far into a part he can’t play. The same is not true of Byrne, who, in the programme’s most delightful moment, worries briefly about the effect of Hollywood exile on his own famously unchangeable voice. “No, you sound like Gabriel Byrne,” the sage comedian Dara Ó Briain reassures him. “That’s not in doubt.”