Listen up: great podcasts about a janitor and music-making

This week: fantastic fiction with a shocking twist; and music demystified 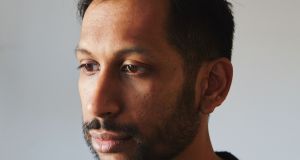 THE ORBITING HUMAN CIRCUS OF THE AIR

This gorgeous fictional podcast, created by Julian Koster of Neutral Milk Hotel, takes place in and around a live radio variety show broadcast from a ballroom at the top of the Eiffel Tower. The protagonist is an unfortunate janitor with aspirations of belonging to the show and being adored on the airwaves. Unfortunately, as lovable as he seems to listeners, the staff of the Orbiting Human Circus don’t feel he belongs.

This first episode is aurally rich – with a grand, old-timey narration weaving in and out of the action and a dramatic documentary-style set-piece to cap off the story. You won’t see the delightful, shocking twist coming. The audio here is excellent. It feels like listening in to another world, which somewhat softens the surrealism. A gorgeous listen: dive in to the whole season.

Hrishikesh Hirway hosts this remarkable series in which the composers and musicians who wrote particular – sometimes iconic – pieces of music chat about the track in extreme detail. This might sound theory-heavy, or a little inaccessible to folks not familiar with the technical ins and outs of making music, but it manages to be the opposite. The artists on board vary from Norah Jones to the Dropkick Murphys to Lin-Manuel Miranda to Sylvan Esso – and some of the most exciting and lively music from the big and small screens makes it in too. You wouldn’t necessarily imagine that an instrument-by-instrument breakdown of the Bob’s Burgers theme music would make for an evocative piece of documentary about capturing childlike joy and frivolity through the sound of a ukulele, or how the layers of sound, synth and heartbeat in the Stranger Things theme paint a picture of the entire series – but in these short, succinct episodes, the songs are pulled apart and played back whole again, and as a listener they feel different and more exciting for having peeked inside them.

NEW PODCAST OF THE WEEK

Now in its first few weeks, Omnibus promises to be a strange and exciting time capsule that examines strange-but-true advents in society and media. Hosts Ken Jennings and John Roderick are chatty and lively (though I always want more hard facts than extended banter) as they explore the short-lived but iconic phenomenon of television broadcasts that hit the nose as well as eyes and ears. A little bit Ripley’s Believe it or Not, a little bit Radiolab – it holds a lot of promise.