Crumlin shook off the negative stereotypes of my youth, but he is bringing them back

Conor McGregor has been fined €400 in Blanchardstown District Court for driving at 158kph on the Naas road near Dublin. Video: Jack Power 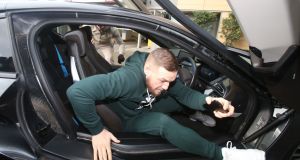 Conor McGregor arrives at Blanchardstown District Court in Dublin, where he was facing a speeding charge. Photograph: Niall Carson/PA Wire

Crumlin had a bad name. When I was growing up in the Dublin Corporation housing estate in the 1960s and 1970s, we felt angry about the perception that we were less respectable than anyone else. Reputation mattered – if you gave a Crumlin address on a job application, you probably wouldn’t be called for an interview. The estate featured in the newspapers only in court reports, with judges wondering rhetorically whether anything good ever came out of Crumlin. Some of this rubbed off on some of us – the idea that you came from a place that was no good fed into low expectations: if this was what they said you were, you might as well settle for it.

Over time, this all changed. The stigma could not be sustained in the face of the reality that Crumlin was an ordinary place, full of ordinary families who worked hard, did their best for their kids and got on with living decent lives. And now it’s back, thanks to a single clown. Conor McGregor purports to love Crumlin, to see its people as his people. If he does, he has a funny way of showing it – by smearing the place in the lurid ghetto glitz of the Get Rich or Die Tryin’ culture. Crumlin kids need that allure like the hole in the head that is its ultimate outcome.

The week before last we had McGregor’s show of contempt for the law, his BMW i8 dramatically pulling in to the car park of Blanchardstown district court, its doors left ostentatiously open to show that he was just popping in for a minute to get rid of the insignificant problem of having been clocked driving at a murderous 158km/h. Last week, we had the Instagram images of McGregor throwing £20 notes from a large wad at the twerking backsides of scantily-clad lapdancers, while his pals, described in the tabloids as “Crumlin criminals”, made lewd gestures. It is all part of the gangsta image that McGregor seems determined to foist on his native place.

This is a disgusting kind of life, but McGregor makes it both desirable and apparently attainable by branding himself as just another kid from the estate. He isn’t. McGregor can live it because he has phenomenal talents as a fighter and self-promoter. The Crumlin kids who look up to him can live it only if they carve their way to the top of the drug-dealing business. For the vast majority of them, there is just one viable route to driving a BMW i8 and throwing wads of cash at lapdancers, to the private plane and the magnums of champagne. And for the vast majority of those who take that route, it will lead to addiction, squalor, chaos and misery. They are infinitely more likely to die tryin’ than to get rich.

I don’t think for a moment McGregor would wish this on any of them, but the reality is that his publicity machine has redefined Crumlin as the white gangsta capital of the western world. It is very easy to laugh at the ludicrous ESPN magazine profile of McGregor that appeared in August as part of the carnival barking for his Floyd Mayweather fight. But it is headlined “Crossing Crumlin Road” and Crumlin is name-checked 27 times, almost every one of them in the context of criminality, violence and drug-dealing. Even Brendan Behan’s satiric description of Crumlin as a place where they “eat their young” – a mockery of the ignorant stereotypes – is dragged out and used as if it were unironic social realism. The profile revels in the stigma: “Proper Dublin recoils from his type: the Crumlin hood rat.”

In the McGregor myth, even a compliment to Crumlin kids turns sour. Thus, in John Kavanagh’s book about coaching McGregor, Win or Learn, the star’s racist and homophobic trash talking is all Crumlin’s fault: “I think you can trace it back to Crumlin, where there is real wit and edge to the way young lads talk.” So using the slave slur “boy” when addressing a black opponent, or repeatedly using the word “faggot” is the Crumlin version of wit.

It isn’t. Long before McGregor, Crumlin had a home-grown icon called Phil Lynott. I’m sure there were people who called him “boy” because he was black and people who called him a faggot because he dressed in outlandish style. But if they did, the vast majority of Crumlin people hated them for it. Lynott brought glamour and colour and fantasy into our lives. But he also brought dignity. He was a genuine working-class hero: cool, sophisticated, quietly courageous in his unbending insistence on his right to be who he was. He gave Crumlin kids a sense of freedom and possibility that was steeped in talent, ambition, creativity and self-confidence. Whether he means to or not, McGregor is holding out to them only the most miserable and debased vision of success – get rich any way you can and spend the money on proving what an obnoxious, vulgar, flamboyantly boorish person you can afford to be. If he loves Crumlin as much as he claims to, he’ll stop using its name as shorthand for lethal idiocy.