Clarkson is jowlier, May is puffier, and Hammond looks clenched and constipated 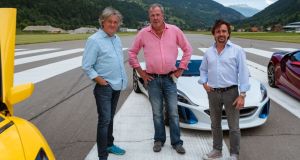 “I know people who eat this stuff,” Clarkson says bitterly over a piece of lettuce. “They’re called women”

There may be only one way to see The Grand Tour (Amazon Prime, now streaming), the successor to Clarkson-Hammond-May’s mid-life-crisis motoring show Top Gear, but there are at least two ways of looking at it.

The first, somewhat reassuringly, is as an hour-long mindless entertainment dreamt up by a cabal of pre-pubescent schoolboys: a show of muscle cars and high-speed chases, skids and ramps, dirt tracks and braggadocio, but without anything as threatening as a hint of female input. The second way to look at it – less reassuring, as the second series begins, but much more fascinating – is as a big-budget TV production in which three ageing men slowly come to terms with death.

Like The Trip, another BBC property that migrated elsewhere, the men featured here may joke constantly about ill health, complain about infirmity, conceal physical limitations or expose their creaking joints, but they can’t seem to stop themselves from tracing the void. Their base may have retreated to the English countryside (“England land,” as Jeremy Clarkson introduces it), but it isn’t quite the Brexit Boys Club you might expect. “The globe is still our playground.”

Besides, there’s an international market to consider and a whole world full of tortuous roads against astonishing mountain vistas to navigate. And yet, turning their attentions to Switzerland for another fast car comparison, the journey seems strikingly finite.

The three cars represent the past, the present and the future – a Lamborghini petrol guzzler (Clarkson), a Honda hybrid (James May) and a Rimac Electric supercar (Richard Hammond) – with a touching instinct for symbolism. All men confess to having spent time in hospital recently, and none of them look fighting fit. Clarkson is jowlier and red-faced, May puffier, and Hammond, still committed to that goatee and plunging open shirt, looks clenched and constipated.

It may have been pitched as high comedy to have them stay, unwillingly, in a Swiss Detox centre, carping like the exasperated figures of an Ealing comedy at Hammond’s idiot organisational skills. But frankly it doesn’t seem like a bad idea.

Everything takes on a sobering metaphorical dimension: when Clarkson can’t manoeuvre his yellow Lamborghini around the tight, cobbled corners of Lucerne, he says, “I spent a couple of hours on the verge of a massive coronary.” Flushed and rheumy, it’s hard to say if he’s joking.

Guest David Hasselhof has trouble getting into the seat of Jaguar for a new celebrity vs celebrity fastest lap contest, and Clarkson is even replaced for similar reasons by a younger driver for a final challenge. At another point we watch him unhappily receive an enema, and later, without any detectable surge of enthusiasm, self-administer something the opposite procedure, cramming his face full of junk food. It’s all become a kind of desperate tragicomedy.

As for his once dependable line in baiting sensitivities, even that has gone soft. “I know people who eat this stuff,” he says bitterly over a piece of lettuce. “They’re called women.” Later, discussing Switzerland’s banning of motorsports in response to another nation’s tragedy, he compares it to America’s invasion of Iraq following the attack of Saudi Arabian terrorists. The audience emits a scandalised “Ooooh.” Too soon?

The crescendo of the episode, though, is another life-threatening car accident involving Richard Hammond, who spent two weeks in a coma and suffered a brain injury in 2006 from a similar televised disaster. The scene here is dramatic and explosive, his electric supercar swerving off the bend of a hill and erupting in an inferno of flames. (The 8,000 fuel cells, May later explains, lit up like a chain reaction, in “thermal runaways”.) “I was all right,” Hammond reports, mysteriously.

Clarkson, for his part, glibly sees the symbolism, if not quite the meaning. “The future is very fast, and extremely quiet, but a bit burny,” he says. That sounds ominous: a grand tour from which no one returns.