Patrick Freyne: These modern cookery programmes are giving youngsters an unrealistic idea of what food should look and sound like 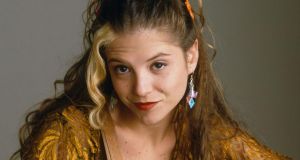 The countess of Devon back in the day.

A few thoughts on the Border, which I believe could be changing soon thanks to lead in the British water system, opportunist bollocks, or both.

As much as I like the suggestion from that Channel 4 News vox-pop person/Tory MP that we should have a border stretching right across the belly of Ireland, giving the Dubs a longed-for opportunity to swap their fake red beards and shillelaghs for beefeater costumes and foreign wars, and much as I appreciate the notion of giving back Donegal (sensible), allowing Cork to secede (inevitable) or invading Wales (a White Paper is on Simon Coveney’s desk), my preferred solution is a border running right down the centre of Ireland, splitting the country along an east-west axis. I think this makes as much sense as anything else because, well, vertical stripes are slimming, and there have been a lot of cookery shows on television lately.

I don’t think I’m exaggerating when I say that almost every programme is a cookery programme now. Blue Planet II should just bite the bullet and rename itself Ingredients. I certainly watch it planning my fantasy stir-fry. But while the British have high-concept food shows broadcast from fictional cafes and inherited castles (more on this later), the Irish equivalents still tend to focus on Gaelic gastronomers operating from apparently normal houses.

Neven teases us with some nearly overspilling risotto. ‘I nearly need a bigger pot,’ he says, stopping just short of putting his finger to his lips coquettishly, the little minx

Neven Maguire has a smiley face and a nice sibilant voice, and he talks of “jazzing up” sausage rolls with sun-dried tomatoes and herbs (food notions), knowing full well that “jazzing up” anything was once considered a mortal sin around these parts. He’s quite calming, and he is accompanied by jingly music and soft-focus shots of food glistening and gleaming and sizzling and being all succulent and alluring. He teases us with some nearly overspilling risotto. “I nearly need a bigger pot,” says Neven, stopping just short of putting his finger to his lips coquettishly, the little minx.

There is no doubt in my mind that cookery programmes are giving impressionable and confused youngsters an unrealistic idea of what food should look and sound like. I am one whimsical string motif away from wanting to have sex with food.

Over on BBC One, Mary Berry, one of the culinary remainers left behind when Great British Bake Off Brexited to Channel 4, now spends her time touring Britain’s stately homes, living on the largesse of tweedy aristocrats. Don’t show me up here in front of the toffs, readers. These are families whose names are mentioned in the Domesday Book, not like your lot, who only get mentioned in court reports about stealing copper wire and Christmas trees.

Depending on your politics, Mary Berry’s Country House Secrets (Wednesday) will give you either something to unrealistically aspire to or a list of addresses to target in the early days of the revolution.

This week, as she comes up to a little jetty on a boat, a man and a dog greet her, and we are told this is Charles Courtenay, the earl of Devon. “Please let it be the dog. Please let it be the dog,” I say to myself. It’s not the dog. Charles is, instead, a handsome young human aristocrat of the sort who sees himself as a hereditary historian rather than a rapacious kleptocrat. This is, I suppose, a sort of progress.

Charles is married to an American, AJ, who formerly played Rayanne in My So-Called Life (seriously!) and who met him when she was at a hen party in a Las Vegas bar. (“What a romantic story,” says Mary Berry, who clearly wasn’t listening.) They also have two adorable and precocious children, who will, I’ll wager, never have to batter each other with plastic shovels over the remains of a Cadbury Boost. (You’ve never done this? Well la-di-da, your majesty!)

The family show Berry around their stately home, Powderham Castle, but whenever my inner politburo bureaucrat has a line on where to billet members of the revolutionary army when we seize the building, she distracts me by saying something like, “Would you like to see my scones? They’re crispy on the outside.” Then the orchestration gets jauntier and she makes scones.

Before you can even think of voting for a high-tax left-wing government, Berry starts dripping something glistening on to a salad, and all is forgotten

Over the course of the programme Berry confers with the groundsman about the deer population, introduces us to some of the family’s aged retainers, and listens to Charles describe heirlooms and discuss the difficulties that come with hereditary property. Then Mary and AJ also literally try on some of the family crowns. And every time, before the viewer can even think of voting for a high-tax left-wing government, Berry starts dripping something glistening on to a salad or glooping something creamy into a goblet, and all is forgotten.

“Ah, but she was in My So-Called Life,” says my wife. “She deserves a castle.”

“Chim chim-in-ey, chim chim cher-oo,” sings Jamie Oliver, his face sooty, his fingers in his lapels, and his flat cap at a jaunty angle, as he knees-up jigs across the floor of the ersatz seaside cafe he runs with the smock-wearing, straw-chewing bumpkin Jimmy Doherty. Apologies. After an hour with Berry and her posh chums I seem to have adopted ToffVision. Let me turn that off. Okay, it’s just two food blokes in normal clothes.

Jamie Oliver gets mocked, of course, as, in the eyes of cynics, doing anything good makes you a naive hypocrite. I suppose these unhappy miserabilists are right

The truth is that Jamie and Jimmy’s Friday Night Feast (Channel 4) is, for all the lovely-caff artifice, a likably entertaining food programme that combines celebrity guests (this week the charming space aristocrat Mark Hamill) with geezer cookery (a menu Hamill first ate while filming Star Wars; a pile of seafood barbecued in a wheelbarrow) and heartfelt social engagement. This week they visit an NGO that runs budget supermarkets that tackle food waste and provide innumerable irreplaceable services for vulnerable people.

Oliver is genuinely interested in environmentally sustainable food and inequality and always integrates these issues into his telly work. He gets mocked for this, of course, because, in the eyes of cynics, doing anything good marks you out as a naive hypocrite.

I suppose these unhappy miserabilists are right. It’s best to appreciate what you have while simultaneously giving up on progress and cheerleading our culture’s descent into hell. And sure it truly is a golden era for gluttony and food programmes. You will remember it fondly in a few years when gnawing on your slowest neighbour’s shin bone in an irradiated bomb crater.