Baz and Nancy head to the Vatican, and Bette and Joan’s epic Hollywood feud in its vicious glory 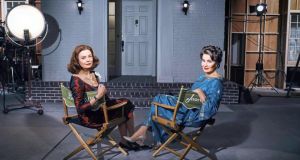 Baz Ashmawy has put his poor sainted mother, Nancy, through some hellish tests of endurance. He’s thrown her out of aircraft, over cliffs and into roiling seas as part of the successful Sky series, Fifty Ways to Kill Your Mammy. She has faced death head-on so many times, and survived it all, it’s clear somebody up there is looking after her. Now, Nancy is about to turn 75, and Baz is stuck for a present to get her. So he’s taking her on the ultimate challenge – to get an audience with the Pope. Baz and Nancy’s Holy Show (Wednesday, RTÉ One, 9.35pm) follows the turbo-charged twosome as they head to Rome and go through the long, difficult process of arranging a meet-up with Pope Francis. For Nancy, a devout Catholic, meeting the Pope would be the greatest birthday present she could ever get, but climbing K2 seems easy compared to the rigmarole they have to go through to get an audience in the Vatican. Will they make it all the way to the inner sanctum? The programme-makers are not giving anything away, but they’ve promised lots of fun and adventure – and some serious reflection on the nature of faith.

Christmas is always a good excuse for nostalgia, and Sinead Kennedy delves into RTÉ’s archives for a half-hour documentary, Christmas Then and Now (Tuesday, RTÉ One, 8.30pm). But this is no Reeling in the Years or Christmas on d’telly-type trawl. She goes back to see how things have changed and brings along some well-known guests on her time travels. Imelda May revisits 1986 when she made her first TV appearance on the Late Late Toy Show as part of the Liberties Drama Group, run by May’s mother Madge and Joyce Reid. She goes back to the Little Flower Hall on Meath Street to see how life in the Liberties has changed since then. Actor Des Keogh visits Swords in north Dublin to see if the 200-year-old Christmas tradition of “mumming” (performing a play and music in homes and pubs) is still alive 50 years after he covered the event as a young reporter. The programme also features a tribute to the playwright John B Keane who was a master at tapping into our collective memories to create magical stories.

You can forget about those wussy Marvel superheroes with their phoney little battles. Make way for the ultimate clash of the titans, when Bette Davis and Joan Crawford square off on the Hollywood backlot. The earth will definitely shake. Feud: Bette and Joan (Saturday, BBC Two, 9pm) stars Susan Sarandon and Jessica Lange as Hollywood’s terrifying thespian twosome, locked in a dramatic duel to see who’s the movie queen bee. This eight-part series revolves around the making of the classic film Whatever Happened to Baby Jane?, in which Davis and Crawford delivered their most electrifying performances. But behind the scenes, sparks were flying too as these great rivals grappled for one last shot at glory in the twilight of their careers. Sarandon and Lange deliver glorious performances as the titular legends, supported by an all-star cast that includes Catherine Zeta-Jones, Kathy Bates, Judy Davis and Stanley Tucci.

“Four disarmingly charming gents, each funny and eloquent in their own unique ways.” That’s how presenter Cat Deeley describes Bono, Edge, Adam and Larry in U2 at the BBC (Tuesday, BBC Two, 9pm). On the release of the band’s new album, Songs of Experience, U2 head into Abbey Road Studios to play some of the songs from the album, along with some of their biggest hits, in the intimate setting of the legendary studio. In this hour-long special, the band chat to Deeley about how they formed (something about a school noticeboard) and how they annoyed 500 million fans by shoving their last album into their iTunes library. “A 40-year friendship, so unusual and so deliciously apparent, the audience will find it infectious,” says Deeley.

TV nostalgia takes a deliciously dark turn with the return of The League of Gentlemen (Monday, BBC Two, 10pm). The classic comedy of terrors is celebrating its 20th anniversary with three new episodes, once again starring Steve Pemberton, Reece Shearsmith and Mark Gatiss in multiple roles as the creepy inhabitants of the grim northern town of Royston Vasey. The town is facing annihilation thanks to boundary changes, but Tubs and Eddie – the ultimate Brexiteers – are still keeping it local, while transsexual taxi-driver Barbara is still delivering too much information to her passengers, and Pauline the Restart officer is still determined to keep her jobseeking charges under her thumb.

Still haven’t decided what to cook for Christmas? With a veritable army of chefs lining up to showcase their seasonal menus, there’s really no excuse for being unprepared for the day. For many of us, though, cooking Christmas dinner is a daunting prospect. Luckily, young celeb chef Donal Skehan is an old hand at knocking up a Christmas feast out of a few bits and bobs in the fridge, and he shares his wisdom in Donal’s Christmas Meals in Minutes (Thursday, RTÉ One, 7pm). Skehan cuts through the festive fat and shows how to rustle up a magnificent Christmas dinner quickly and easily and still have time to relax with a sherry and watch the Mrs Brown’s Boys Christmas Special.