Miriam O’Callaghan has her work cut out with Shane MacGowan 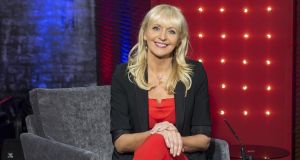 Miriam O’Callaghan: found the unique Shane MacGowan a difficult man to pin down when the former Pogues singer turned up on Sunday With Miriam.

Shane MacGowan isn’t one for dwelling on the past. On the publication of fellow Pogues member James Fearnley’s memoir about life in the band, for instance, MacGowan commented: “It’s just how I imagine I’d remember it”. So Miriam O’Callaghan has her work cut out for her as she attempts to get the famously reticent singer to open up about his life and work.

Sure enough, when O’Callaghan meets MacGowan and his longtime partner Victoria Mary Clarke on Sunday With Miriam (RTÉ Radio 1), the presenter uses her full array of inquisitive hums, sympathetic sighs and emollient compliments to coax answers out of him. Even then, MacGowan rarely addresses the question, preferring to mumble or ramble, sometimes both. In short, it’s O’Callaghan’s most entertaining interview in a long time.

MacGowan is short on detail, long on atmosphere. He recalls his early family life in Tipperary, which seems to have been one long sing-song populated by rambunctious relatives and fugitive IRA men. When the queries get more specific, MacGowan doesn’t give much away. When O’Callaghan asks if it’s a burden that he was born on Christmas Day, he harrumphs that “it’s a burden being asked about it all the time”.

But he’s grouchy rather than misanthropic. At times he talks with a gruff honesty that is all the more poignant for its lack of sentiment. He says it was easy to write lyrics for the Pogues but adds: “I haven’t written like that in years”.

It helps that he’s accompanied by Clarke, who has written her own absorbing account of life with MacGowan; she gently prompts him whenever he clams up. Clarke also talks frankly of her experience of depression as well as her belief in angels, which even she seems to find slightly unbelievable.

MacGowan in turn talks about his own slightly idiosyncratic but deeply held Catholicism. Typically, however, he resists O’Callaghan’s cookie-cutter invitations to reveal his inner feelings, even if his response speaks volumes.

“Are you quite a spiritual person?” the host asks at one point.

“Yeah, very spiritual,” MacGowan replies unenthusiastically, before letting rip with his trademark sandpaper cackle. For such moments radio was invented.

A phone-in show with a wilfully provocative host, The Niall Boylan Show (4FM) isn’t normally associated with emotional moments, unless you count the unhinged ranting of some callers.

On Tuesday, however, Boylan reveals his softer side when he talks to Tanya, a mother of three whose husband has just died after a short illness. Tanya explains how her 44-year-old husband, Michael, was fit as a fiddle until a stroke and lung cancer struck him.

This being Ireland in 2017, there are also grim tales of failures in the health system, with Tanya telling Boylan that some of her husband’s concerns were dismissed when he went to hospital. Unsurprisingly, Tanya’s distress is audible, causing Boylan to show his rarely-seen tender side as he asks if his guest needs a glass of water.

As if all this weren’t bad enough, Michael’s death has also left Tanya financially bereft.

“You don’t even have the money to bury your own husband,” says Boylan, pointing his audience towards a web appeal to raise funds for Tanya’s family. The host sounds genuinely moved– “I can’t imagine what that situation must be like,” he says – but equally he is aware such items aren’t necessarily to his listeners’ taste. “We don’t do that very often,” he says, “I know that’s difficult to listen to.”

Normal service is quickly resumed, however. Sean, an American, phones in to cast doubt on poll findings that a majority of Irish people are against Donald Trump visiting here. Boylan agrees with Sean’s assertion, and launches his own impromptu text poll on the issue. Sure enough, this poll is more favourably disposed to a Trump trip, though as the host wryly remarks, “maybe that’s just my audience”.

Another caller, Pádraig, brooks no doubts about the US president, even when Boylan brings up Trump’s race-baiting comments. “One man’s racist is another man’s patriot,” comes the worrying reply. Pádraig contrasts Trump with Europe’s leaders, who he describes as “weak and spineless”, with the telling exceptions of Marine Le Pen and Nigel Farage.

Listening to this particular member of Boylan’s audience have his say, it’s hard to know whether he represents an alarming but otherwise unheard Irish populism or is merely an attention-seeking caller spouting splenetic clichés. Either way, it really is difficult to listen to.

Some relief can be found in The Green Room (Newstalk, Saturday). Aoife Barry’s arts magazine show has shrunk in duration and finds its timeslot buffeted by the schedule – last weekend’s show goes out late due to a Leinster rugby match – but it still turns up engaging items, often from the margins of the cultural world. One such item is Barry’s interview with Islamabad-based Laleen Sukhera, founder of the Jane Austen Society of Pakistan.

On the face of it, it’s quirky stuff, as Sukhera explains how society meetings consisted of tea parties in Regency costume. But the interview also gives fascinating glimpses into Pakistani society. Sukhera explains how Austen’s work is well known in Pakistan; being a Commonwealth country, British authors are not really seen as foreign, she says. The society’s literary discussions, meanwhile, often tackle potentially taboo subjects, such as Austen’s sexuality.

Eventually, Barry asks the question she’s been skirting around: “Does 21st-century Pakistan have much in common with the 19th-century England portrayed by Austen?”

“Our social codes are very similar,” says Sukhera. But she remains upbeat. She has edited an anthology of Austen-inspired stories about modern Pakistan, giving a more nuanced portrait of the country.

“You could say we live in a bubble,” she tells Barry. “But you have to persevere with some normalcy.” Dwelling on the past isn’t always a bad thing.

On Tuesday, Morning Ireland (RTÉ Radio 1, weekdays) carries a report about exotic animals brought to Ireland as pets that now roam free. Kevin Cunningham of the National Exotic Animals Sanctuary explains how raccoons, which can be dangerous, have been sighted near Trim, Co Meath. But presenter Gavin Jennings isn’t too bothered by this news. “Sure, you see all sorts in Co Meath,” he quips. Lest this be presented as an example of metropolitan bias against the Royal County, it should be pointed out that Jennings hails from Navan.