Serial Killer with Piers Morgan: Neither man will admit to what they are 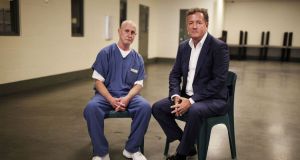 Piers Morgan makes a hideous, supercilious self-justification for the base exploitation of his interview with Mark Riebe

“Every journalist who is not too stupid or too full of himself to notice what is going on knows that what he does is morally indefensible.” So begins Janet Malcolm’s book The Journalist and The Murderer, an account of a sleazy kind of double cross, in which a convicted killer thought his interviewer would exonerate him, while the writer was out to stitch him up. Neither of them came out well.

In Serial Killer With Piers Morgan (TV3, Monday, 10pm), an interview conducted between a suspected serial killer and a suspected journalist, we get to witness an unrestrained narcissist with a shallow charm and a vastly over-inflated sense of self-importance address his mirror image. It’s up to us to spot the difference. Sitting so close to each other, in Florida’s Blackwater River Correctional Facility, that their knees could touch, they are also dressed in the same colours. Who’s playing who?

“You’ve been trying to nail this guy for a quarter of a century now,” Morgan says to the special agent who has been investigating Mark Riebe. “What would you like me to say to him?” Convicted for the murder of one woman, Donna Callahan, but suspected of several more, Riebe had confessed to the murder of 13 women in total, but retracted those confessions. Morgan, the odious morning television host, seems confident he’s the guy to crack the case wide open.

His tactics seesaw between cajolery and barracking: frequently speaking over each other, he and Riebe sound unerringly similar. “I’m not judging you at all,” Morgan says, when Riebe becomes agitated, then “I will show you more respect.” It’s as though the US Celebrity Apprentice winner is accustomed to pandering to psychopaths. But, showing photo after photo of the victims, Morgan can’t psychologically outmaneuver this man of slow wit, unfreighted by conscience or remorse.

With Riebe ready to abandon the interview at any time, Morgan resorts to condemning him in stentorian voice over while the crimes are detailed. “I’m struggling to get much in the way of truth from Mark Riebe,” he tells us after uncovering precisely nothing, “but at least the victims’ families can now judge for themselves.”

What a hideous, supercilious self-justification for such base exploitation, particularly when Riebe had himself taunted the victims’ families with the open wounds of their tragedy. Are they likely to feel that justice has now been served because Riebe storms out of the interview while Morgan clumsily calls after him, “You did kill them, didn’t you? You killed them all”? Neither man, you feel, will ever admit to what they truly are.