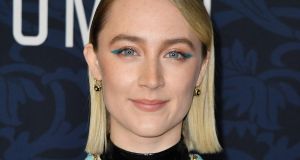 Saoirse Ronan has been nominated as best actress in a drama at the upcoming Golden Globe Awards. The Irish actor, still only 25, picks up her fifth Globe nomination for her turn as Jo March in Greta Gerwig’s adaptation of Louisa May Alcott’s perennially popular Little Women.

Ronan won the Globe for best actress in a comedy – her only win so far – for Gerwig’s Lady Bird, in 2018. She is now on track for a fourth Oscar nomination in January. Little Women, the eighth feature adaptation of the book, also stars Emma Watson, Florence Pugh and Timothée Chalamet in a coming-of-age tale from 1860s New England.

In the television section, the Irish actor Andrew Scott scored a nomination as best supporting actor for his turn as the “hot priest” in the hugely popular comedy series Fleabag. He has a decent chance of a win.

Noah Baumbach’s Marriage Story topped the nominations chart with six mentions. Scarlett Johansson competes against Ronan as one member of a couple disintegrating on separate coasts of the United States. Adam Driver, her other half in the film, surely stands a strong chance of converting his nomination for best actor into a win. But the surprising lack of a nomination for Baumbach as director suggests the wind may not be quite so strong in that film’s sails.

There was also qualified success for Martin Scorsese’s The Irishman. The Netflix epic, picking up five nods, did score the second-highest number of nominations, but Robert De Niro, who is in virtually every scene, will be disappointed to lose out on a best-actor-in-a-drama slot. That race will be competed between Driver, Antonio Banderas, for Pain and Glory, Joaquin Phoenix, for Joker, and – the surprise, perhaps – Christian Bale, for Le Mans ’66.

The other big player at the nominations was Quentin Tarantino’s Once upon a Time in... Hollywood. That sprawling drama, tying The Irishman with five nods, was mentioned for best comedy or musical, best actor in a comedy or musical, for Leonardo DiCaprio, best supporting actor, for Brad Pitt, best director and best screenplay. They love Tarantino at these awards.

Two films that performed slightly above expectations were Fernando Meirelles’s The Two Popes and Bong Joon-ho’s Parasite. The former, featuring Jonathan Pryce as Pope Francis and Anthony Hopkins as Pope Benedict XVI, took the place in best drama film that many had marked down for Little Women. Both actors are in the running, Pryce in lead and Hopkins (somewhat arbitrarily) in supporting.

Bong, whose Korean film was a popular Palme d’Or winner at this year’s Cannes Festival, takes a rare best director-spot for a film-maker not working in English. For no reason anybody has been able to explain, “foreign language” films are not eligible for the best-picture races here, and Parasite had to settle for additional nominations in best screenplay and best foreign-language film.

Saoirse Ronan features stiff competition in her race. For all the good will the Carlow woman has accrued here over the years, Renée Zellweger feels like the favourite for her showy turn as Judy Garland, in Judy. Johansson may also be in with a shot at a ceremony that loves movie stars.

There will be some unease that no film by a woman has made it into either best-picture race and that no woman gets a best-director nomination. That last competition will be between Bong, Tarantino, Scorsese, Sam Mendes (for his first World War epic, 1917) and Todd Phillips for the controversial Joker. Fans of Little Women will point out that Greta Gerwig is right there in front of voters.

Industry watchers will be analysing the impressive performance by Netflix across film and television categories. The streaming service picked up a stunning 34 nominations, miles ahead of any competitor. Marriage Story, The Irishman and The Two Popes scored for Netflix in film. The Crown and Unbelievable took four nominations each in the telly battles.

It remains to be seen if the Academy of Motion Picture Arts and Sciences, which awards the Oscars, can get past a rumoured suspicion of the digital newcomer. There is, however, little doubt that, as Variety put it, a “new world order” now rules the smaller screen. Hulu, Amazon Prime and the recently unveiled Apple TV Plus all secured Globes nominations.

The actors Tim Allen, Dakota Fanning, and Susan Kelechi Watson announced the awards at break of dawn from the Beverly Hilton hotel, in Los Angeles. Dylan and Paris Brosnan, sons of the Irish actor Pierce Brosnan, were also present in their roles as 2020 Globes ambassadors. They will escort the winners on and off stage at the ceremony next month. Tom Hanks will receive the honorary Cecil B DeMille award for outstanding contribution to film. Ellen DeGeneres will pick up the second ever Carol Burnett award for outstanding achievement in television.

An eccentric precursor to the Oscars, the Globes are presented by about 100, largely obscure members of the Hollywood Foreign Press Association. Their reliability as pointers to the Oscars can be overestimated, but it certainly seems as if the members are doing their best to provide such a bellwether.

Some controversy has already attended the decision to invite Ricky Gervais back as host. The UK comic and actor enjoyed tweaking sensibilities on his four previous appearances as MC, but that was before the change in attitudes that accompanied the #MeToo revelations in 2017.

The Golden Globe winners will be announced at the Beverly Hilton on the evening of January 5th, 2020