New this weekend: Ordinary Love, So Long My Son 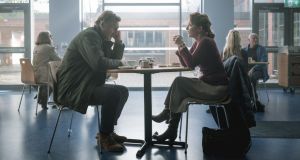 ORDINARY LOVE ★★★★☆
Directed by Lisa Barros D’Sa and Glenn Leyburn. Starring Liam Neeson, Lesley Manville, David Wilmot, Amit Shah. 12A cert, gen release, 92 min
Joan (Manville) and Tom (Neeson) are a long-married and contented Belfast couple who go for walks along the coast (as far as the tree and turn) and lightly bicker over how much beer to buy at the supermarket. They lost a daughter years before, but these days adding Worcestershire sauce to the soup is the most seismic development in their lives – until Joan discovers a cancerous lump on her breast. Co-directors Barros D’Sa and Leyburn first came to prominence with the riotous Cherrybomb and Good Vibrations. Working from a personal screenplay from Owen McCafferty, the film-makers paint an intimate portrait of a couple in delicate brush strokes. Ignore the unassuming title: this love story is extraordinary. Full review TB

In his 13th film, Wang Xiaoshuai, one of the leading international figures of the sixth generation., plays with chronology in a manner that revitalises the longform PRC picture. There are repeated flashbacks to a reservoir, when the pre-teen son of Yaojun and Liyun’s is cajoled into swimming by his friend Haohao, and drowns. Haohao’s guilt stays with him and impacts on his parents’ close friendship with Yaojun and Liyun. That estrangement deepens after Haohao’s mother forces Liyun to abort her second pregnancy, in keeping with the government’s one-child policy. When Dengism kicks in, the grieving parents are forced to move to a far-flung district. There they adopt an orphan (with a crucial backstory) who comes to resent being a substitute for a dead son. Several of the plot twists might sit easy in a racy soap opera, but they power the grandly-scaled film along. Full review TB

Johnson brings a starry cast together for a delightful pastiche of the big-house whodunnit. The director knows the trick here is to pile the revelations on so rapidly that audiences have no time to notice the thinness of the structure. Revealing genuine affection for genre, decorating the action with brown wood, he makes no concessions to safety in his vigorous hammering of the accelerator. It’s over before you have time to question the logic. Great fun. Full review DC

During the Van Diemen’s Land’s Black War, a young Irish convict woman (Franciosi, hugely impressive) hunts a British officer through the rugged Tasmanian wilderness, dead set on revenge for a sickening act of violence against her family. Along the way she joins with an Aboriginal tracker (Ganambarr) with his own traumatic backstory. Together they snarl their way across an unruly landscape until they come to realise they have one thing in common: “I hate the feckin’ English!” Kent’s eagerly awaited follow-up to The Babadook is not, generically speaking, a horror film. And yet it is far more gruelling and nightmarish than its predecessor. Indeed, it’s as nasty a post-colonial revenge fantasy as a historical genocide demands. Full review TB

Concerned for their bored and soulful-looking rescue dog, John, a wildlife film-maker, and Molly, a traditional foods chef, swap city life for a rundown orchard. Over eight years, under the guidance of a soil whisperer they create an entirely organic farm that looks like a storybook, complete with chickens, sheep, ducks, cattle, pigs. peaches, cherries, and bees. A documentary variation on A Year in Province or We Bought a Zoo, The Biggest Little Farm was the subject of a four-way bidding war (ultimate winner: Neon) and has gone on to be a sleeper hit in the US. It’s easy to see the appeal. Full review TB

Charlie (Driver), a theatre director, and Nicole (Johansson), an actor, are hacking their way through a particularly bloody divorce. He has remained in Brooklyn; she has moved to Los Angeles. They start out playing nice, but when lawyers get involved the gloves come off. Baumbach’s best film yet combines his taste for insidious comedy and upper-class Boho angst to endlessly diverting effect. The dialogue sparkles. The actors play skilfully off one another. Humour colours every bitter moment. An absolute marvel that should not be missed. Full review DC