The Biggest Little Farm: An irresistible sleeper hit of a movie

Review: Emma the pig and a ragged rooster that moves in with her head the animal cast 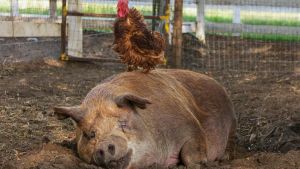 A non-fiction movie variation on A Year in Provence or We Bought a Zoo, The Biggest Little Farm was the subject of a four-way bidding war earlier this year (between Netflix, Sony, Disney and ultimate winners Neon) and has gone on to be a sleeper hit in the US.

John Chester is an Emmy-award winning wildlife filmmaker; Molly is a traditional foods chef. Concerned for their soulful-looking rescue dog named Todd, they leave city life and Santa Monica behind, in favour of a rundown orchard.

Over eight years, under the guidance of soil whisperer Alan York, they create an entirely organic farm; not just any organic farm but one that looks like a storybook farm, complete with chickens, sheep, ducks, cattle, pigs. peaches, cherries and bees.

Each season brings a new catastrophe and a new natural remedy. Greedy starlings gobble the peaches until the hawks arrive. Gophers ruin the soil before owls swoop in. Chicken-killing coyotes pose an ethical dilemma for a couple who are determined to let nature dictate.

Emma the pig and the ragged rooster that moves in with her head up an animal cast that included unruly sheepdogs and insatiable chickens and ducks. The gorgeous photography, which ranges from grand tableaux of orchards and rolling hills to extraordinary micro-lensing of insects and birds, is credited to five cinematographers.

There are bookending sequences that don’t entirely work, concerning an incoming wildfire, and the word “diversity” is mentioned a little too often in the narration, but this is completely irresistible, nonetheless.