The Nightingale: A ‘hate the feckin’ English’ post-colonial revenge fantasy

Review: This is an extraordinary film, powered by political and historical fury 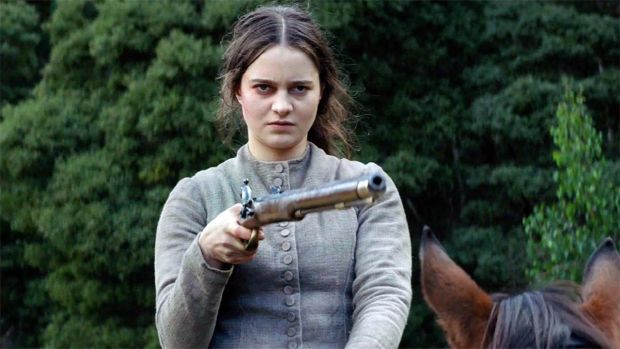 During Van Diemen’s Land’s Black War, a young Irish convict woman named Claire (a hugely impressive Aisling Franciosi) hunts a British officer through the rugged Tasmanian wilderness, dead set on revenge for a sickening acts of violence he committed against her family.

Along the way she enlists the services of an Aboriginal tracker named Billy (Baykali Ganambarr), who has his own traumatic backstory. Together, they snarl their way across an unruly landscape until they come to realise they have one thing in common: “I hate the feckin’ English!”

It’s a fair sentiment in the circumstances. Clare’s nemesis Lieutenant Hawkins (Sam Claflin) and his ghastly henchmen are indiscriminately barbaric. The film’s plot has echoes of True Grit and other hellbent westerns but the foes are blacker than the blackhats that populate Cormac McCarthy’s Blood Meridian.

Jennifer Kent’s eagerly awaited follow-up to The Babadook is not, generically speaking, a horror film. And yet, the film which has inspired sensational stories of walkouts and faintings, is far more gruelling and nightmarish than its predecessor.

In a recent interview Baykali Ganambarr, the breakout Aboringinal star of the Nightingale, revealed that there were psychologists on set to help the cast as they enacted brutal rapes and murders. Arguably, it’s as nasty and unflinching a post-colonial revenge fantasy as a historical genocide demands.

A slightly overextended run time and a meandering last act – in which the hitherto steely Clare appears to lose her nerve – dulls some of the impact. The Nightingale remains an extraordinary film, powered by political and historical fury. The use of Gaelic and Palawa kani and a melancholic final sequence add elegiac notes to the righteous anger.