Satirical masterpiece or manifesto for psychopathy, this is a beautifully made film 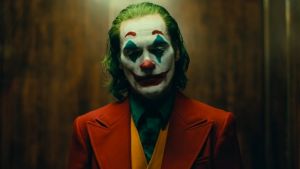 No thesis is being laid out. No conclusion is being drawn about the white male’s role in society

Even before Joker unexpectedly won the Golden Lion at Venice – following in the footsteps of Tarkovsky, Visconti and Cassavetes – the discourse had become deafening. Todd Philips’s standalone origin story divided those who hadn’t seen it (and a few who had) into defenders of a satirical masterpiece and opponents of an irresponsible manifesto for incel psychopathy.

The irony here is that, though beautifully made and often unsettling, Joker does not have an idea in its painted head. Set around 40 years ago in a version of Gotham that makes no effort to be anything other than contemporaneous New York, the picture is alive to the notion that young white men, then as now, use societal breakdown to excuse misogyny and misanthropy.

The functional screenplay by Phillips and Scott Silver could hardly make its debts to Scorsese’s Taxi Driver and The King of Comedy more explicit (if you were in any doubt, the presence of Robert De Niro in the Jerry Lewis role from the latter would settle it).

Yet there is no sense of the filmmakers commenting on the psychological imperatives or offering worthwhile parses on their cinematic inspirations. We are here for a grim fairground ride and Joaquin Phoenix, whose title character kicks everything else into distant wings, spares no effort in keeping us diverted throughout. Wipe off the make-up and you will, however, find nothing but more make-up beneath. The upcoming Shaun the Sheep film works harder at arguing its sociological thesis.

And yet. The undeniable coolness of Phoenix’s Arthur Fleck makes its own implicit arguments. Yes, he’s a loser. Living with his mother (Frances Conroy) in a crumbling city apartment, Arthur earns pennies as a street clown, but dreams of making it as a stand-up comic.

We begin with him being beaten senseless. Later, he becomes concerned with his complex parentage. An unlikely relationship with the girl next door offers some hope of redemption, but the bullies and the belittlers – some of whom sing Sondheim while brandishing fists – look to have done for him already.

Bad things happen to Arthur throughout. We are, however, always aware that he is in an exceptional class of sat-upon maniac. The problem is partly a screenplay that follows one unyielding trajectory from instability to disturbance to homicidal mania.

Phoenix, playing a man who’s 60-per-cent crackers by the opening frame, is not offered the nuance that coloured his performance as a less full-on psychotic in The Master. His casting contributes to the grandeur of this Joker.

It’s another terrific, crunch-the-chair-legs, tear-out-the-follicles, leave-spittle-on-the-ceiling performance, but, for all his gifts, Phoenix can’t supress the charisma that draws stardust about even the early, kicked-about Arthur.

Heath Ledger and Jack Nicholson did the same as the Joker, but they weren’t at the centre of their films, and they weren’t playing in the heated social-media age.

Phillips, best known for The Hangover movies, has, at his disposal, the cowardly option of the “I dunno” shrug. No thesis is being laid out. No conclusion is being drawn about the white male’s role in society.

We’re not sure if this Joker is a reflection of decadent times or a reaction against them. Is his madness due to the childhood abuse we learn about late on? All those things are possible. We do know (because he says so) that he doesn’t believe in anything, but nihilism is itself a political position. Maybe Joker is the notorious New York vigilante Bernie Goetz. I dunno.

In quieter times we may have been left to enjoy a production that – if highly derivative – gives the industry’s finest a chance to stretch out. Hildur Guðnadóttir’s terrific, brooding score finds an effective cello leitmotif for its protagonist. Lawrence Sher’s camera adores its slow swoops across battered tenements. This is a classy diversion.

Then again, in quieter times nobody may have bothered to make Joker.