Review: Titled Ford v Ferrari in the US, this is a sweaty, oily macho throwback 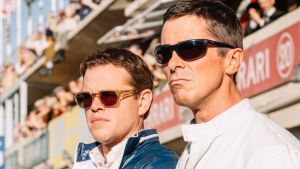 Caitriona Balfe has a moment here. As crisis looms, Ken Miles (Christian Bale), a very fast race driver, and Carroll Shelby (Matt Damon), a top engineer, settle their differences like men once used to do. Ken biffs Carroll and, after some grappling, they set to hammering one another to a pulp on the grass outside Ken’s house.

Balfe, as Mollie Miles, has too much “worried wife” stuff to do elsewhere, but the élan with which she flicks open a deck chair and settles down to watch is to die for.

James Mangold, a fine director of mainstream entertainment, is laying out his stall here. One is reminded of Kingsley Amis’s puzzled stories concerning perfectly respectable contemporaneous American men flinging off suit jackets and brandishing fists at the slightest provocation.

Le Mans ’66 has little to say about America’s current discontents. It doesn’t have much to say about that country in 1966. Here is a big, sweaty, oily film that relaxes without apology into an aesthetic that was already under stress 50 years ago. Pull up your own chair and watch the manly men bicker, race and fight.

Most Europeans will instinctively be on the side of the sleeker, sexier Ferrari. That hardly matters

Miss Le Mans ’66 and, well, there probably won’t be another one along in a minute.

Titled Ford v Ferrari in the US, the film details, yes, the Ford Motor Company’s efforts to win the 24 Hours of Le Mans in 1966. To this point, Ferrari had the competition in lock. Though eating and breathing money, Ford remained a blue-collar company that produced functional vehicles for working-class drivers.

The Detroit firm – controlled by awkward Henry Ford II (the always excellent Tracy Letts) – first tries to buy its more glamorous rivals. When that fails, it hires Shelby to build a winning car in triple-quick time.

Most Europeans will instinctively be on the side of the sleeker, sexier Ferrari. That hardly matters. Shelby and Miles are at least as hostile to the stuffed shirts in Ford as they are to their rivals on the track. You know how this used to go. They are wildcards, loose cannons, lone wolves (even if they travel as a pair).

Damon plays Carroll as a realist who will bend any rules to achieve success. Bale makes much of Miles’s Brummie individuality: he genuinely cares not a whit for authority or experience.

The familiarity of the rhythms do grate after an hour and a bit, but Mangold makes up for that with dynamic racing sequences that clank and splutter in ways that excited even this motor-sports agnostic. You probably already know if you like this sort of thing. If you do, you’ll like Le Mans ’66. If not, then not.