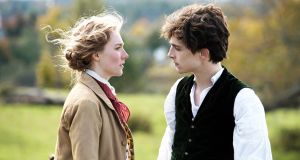 It’s not often that the initial Twitter responses to a “highly anticipated” movie are anything other than enthusiastic. Greta Gerwig and her team can, however, cuddle up with the knowledge that Little Women – starring Saoirse Ronan, Meryl Streep, Timothée Chalamet and everyone else – has cleared that hurdle with some inches to spare.

Scott Feinberg, who handles the “awards chatter” for the Hollywood Reporter, was among those praising the latest adaptation of Louisa May Alcott’s adored novel following a preview in Los Angeles.

“Little Women is charming just like the novel/prior versions. Each role perfectly cast. Rousing score. Timely as ever,” Feinberg writes.

The screenwriter Jenelle Riley was already marking Oscar cards. “Saoirse Ronan is going to land her fourth Academy Award nomination for #LittleWomen at the age of 25,” she tweeted.

Several of the tweets noted that Gerwig’s adaptation tells much of the story in flashback. “Gerwig makes this material her own in delightful ways you’d expect and some adult-meditation-on-childhood ways I didn’t,” Chris O’Falt from IndieWire comments. “So rewarding to see the ease with which she paints on this canvas and that she (or any director these days) was given it.”

If the initial enthusiasm is sustained, Little Women could be on the way to multiple Oscar nominations. Were Ronan to score, it would be her fourth nomination before reaching the age of 26.

Marc Malkin from Variety was not holding back. “#LittleWomen could earn multiple Oscar noms, including best picture and directing for Greta Gerwig. As well as another for Gerwig for adapted screenplay,” he tweeted. “As for acting noms – lead actress for #SaoirseRonan, supporting for #FlorencePugh and possible #TimotheeChalamet.”

Florence Pugh, the brilliant English actor who landed spectacularly with Lady Macbeth and Midsommer, is receiving some of the most enthusiastic praise. Gregory Ellwood, among the more influential Oscar bloggers, notes her performance. “Little Women is charming if not a wee bit long,” he wrote. “Saoirse Ronan and Florence Pugh are the standout performances. Best Picture nominee...maybe?”

There have already been a few raised eyebrows at the more qualified praise put the way of Emma Watson. One Jakob Kolness tweeted: “#LittleWomen is delightful, Saorise [sic] Ronan is at her best ever & while she doesn’t send any boys to death in a burning bear suit, @Florence_Pugh makes Meryl Streep her bitch. Greta Gerwig kicks ass behind the camera yet again. Emma Watson tries.” The Harry Potter stans replied with naked fury.