Fleabag: why do so many women fancy the Irish priest? 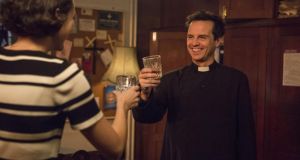 The Priest, like Fleabag herself, does not have a name. In the credits that roll after each episode of the hit BBC show he is simply “The Priest”. On Twitter, and in WhatsApp groups across Ireland and Britain, he gets an adjective at least, becoming “The Hot Priest” or, occasionally, “The Sexy Priest”.

The Priest, as portrayed by the Irish actor Andrew Scott in the second series of Fleabag (written by and starring Phoebe Waller-Bridge in the title role), has captivated hundreds of thousands of us – and it is heterosexual women who are most vehemently passionate about him.

As one Twitter user put it, “When that priest said ‘kneel’ my vagina exploded in a way a man has never quite been able to achieve.” Or “It’s not just me who now spends most minutes of the day thinking about the Fleabag priest. Right?”

To recap – there are series-two spoilers ahead for anyone who is not up to date – The Priest came into Fleabag’s life when her father and his soon-to-be-wife (played to repugnant perfection by Olivia Colman) asked him to officiate at their wedding. Over five episodes Fleabag and The Priest have become intriguingly and frustratingly close, bonding over cans of G&T, a sexual tension building achingly, an audience watching and willing them to just do it.

Gin-in-a-tin sales have increased by almost a quarter at Marks & Spencer, a boost that the retailer attributes to Fleabag – and it’s not just a thirst for gin that’s spiking. Women everywhere are finding themselves thirsty for Fleabag and The Priest, their will-they-won’t-they chemistry leaving a lake-drenched Darcy meeting Elizabeth Bennet in the shade in terms of sexy TV moments.

Last week Fleabag and The Hot Priest finally did it – and their urgent, open-mouthed kissing did not disappoint. Tonight we will find out, in the last episode of the series (and apparently the last episode ever: there will be no third series of this programme that has struck a massive chord), whether we get a happily-ever-after ending or something darker and messier and altogether more fitting of Fleabag.

The Priest understands Fleabag in a way most others around her don’t; he sees her breaking the fourth wall, looking into the camera, to us, the audience. It’s a device integral to who Fleabag is: she is constantly undermining her experiences and the people around her with these sly, mischievous asides.

Phoebe Waller-bridge appreciation tweet. Fleabag series 2. Shitting hell!
When that priest said ‘kneel’ my Vagina exploded in a way a man has never quite been able to achieve.

Is ANYONE not in love with Andrew Scott

She doesn’t allow herself to be vulnerable; she scoffs at almost everything. The Priest has the potential to open her up – but as you would expect from a character written by Waller-Bridge (who is also responsible for bringing Killing Eve to our screens), The Priest is not straightforwardly good.

In my Hot Priest-dedicated WhatsApp group – once used to swap gossip and facilitate meeting up but now devoted solely to exchanging Fleabag-related theories – we have a lot of questions about The Hot Priest. Is he actually creepy, a sinister alcoholic? Or does he simply like gin in a tin in a normal way? Is he a charming baddy? A misunderstood goody? Or is he, like Fleabag herself, a damaged and flawed person just trying to get by?

One of the main questions we regularly return to is: why do I fancy him so much? What is it about this priest that turns me on? It’s particularly troubling to us as a bunch of Irish women. In the UK, Google searches for “Can priests get married?” are up 170 per cent, a direct result of the Hot Priest effect.

It’s unclear whether internet users are searching to find out whether Fleabag can marry The Priest or whether they can marry The Priest, but, either way, it’s obvious that they’re interested. Irish women have to do no such googling. We grew up with priests. We know how this works.

For us, The Hot Priest’s fancy clerical robes and suburban Dublin accent – Scott grew up in Clontarf, in Dublin – are not exotic, as they might be for British viewers, but oppressively familiar. Scott is good looking but not in a Hollywood leading-man way; he looks like someone we might actually know: a brother’s friend, a man who works at the bank, a young priest who worked in the parish for a couple of years before mysteriously disappearing.

“There is a nostalgia involved in fancying The Hot Priest,” a friend suggests. “He reminds us of people we used to fancy.”

We whizz through our memories, alighting on sexual epiphanies from childhood, scanning our psyches to see if this priest-fancying is a new development.

“I blame the church entirely,” another woman in my WhatsApp group says. “They messed us up, repressing our sexuality, and now we all fancy a fictional priest.”

In real life, away from the vestments, Scott has spoken about his own relationship with the church. “The damage the Catholic Church did to me is still within me,” he told the UK Independent.

Scott is gay, and his new status as a sex symbol is being used to illustrate the fact that audiences don’t actually care about the sexual orientation of the actors who play the characters they love or lust after. It’s a neat riposte to the studios too conservative or too bigoted to give LGBTQ+ actors leading roles. Actors can be gay or straight or bi or trans; if characters are well written and well realised, then audiences – gay or straight or bi or trans – will lust after them.

No matter what happens tonight with Fleabag and The Hot Priest, that feels like a happy ending.

The final episode of Fleabag is on BBC One at 10.35pm