The Two Popes: one giant leap of faith

Review: Anthony Hopkins and Jonathan Pryce go full throttle in a sanitised version of the truth 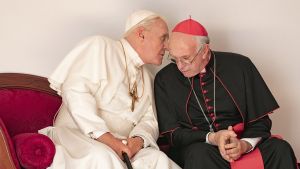 Anthony Hopkins and and Jonathan Pryce in The Two Popes

The world has largely forgotten Morris West and the 1968 adaptation of his bestseller The Shoes of the Fisherman.

Yet that Michael Anderson film, starring Anthony Quinn as a cleric from behind the Iron Curtain who unexpectedly becomes pope, has twice seemed prescient. Pope John Paul II came to us from Poland. The current pope, Jorge Mario Bergoglio, who shared the protagonist’s egalitarian instincts, took the throne in circumstances at least as twisty as those in West’s bullet-stopping doorstop.

The Shoes of the Fisherman is a good-bad film that owes no duty to history or to what were then current affairs. In building a story around the relationship between Pope Francis (as Cardinal Bergoglio became) and Pope Benedict XVI (formerly Joseph Ratzinger), Fernando Meirelles is playing a more dangerous game.

Benedict and Francis are pitched as near-complementary personalities

In a parallel universe, The Two Popes would be an irresistible fiction. Played to divine perfection by, respectively, Anthony Hopkins and Jonathan Pryce (Cymru am byth!), Benedict and Francis are pitched as near-complementary personalities. The German is rigid, dogmatic and, if not exactly humourless, then uncomfortable with levity. “When I try to be myself people don’t seem to like me very much,” he says wearily. Francis is warm, empathetic and committed to lasting change. Ben once recorded an album of classical piano pieces. Frank likes Abba.

In our alternative universe, this could be the scenario for a detective show only marginally sillier than the Austrian series about a crime-solving dog that Benedict admits to adoring (yes, Kommissar Rex really exists). As in all such neat fictions, each character eventually bends a little to the other’s will. The core conversation focuses on Benedict breaking the news of his imminent retirement and preparing Francis for the role of successor.

The Argentinian comes around to the idea (hardly a spoiler), but the film makes more of the lessons the older man learns from the younger. His eventually yielding to the pleasures of football and pizza stands in for more significant admissions about how the church has failed the poor, the abused and the otherwise marginalised.

We shall risk the mortal sin of hyperbole by suggesting that these two experienced actors have never been better. Pryce allows the hint of an ironic smile to play in the corner of a face that constantly registers ambivalence about authority. He accepts the responsibility, but knows that real life is elsewhere.

Hopkins (currently doing an even better job of atoning for mid-career excess than Al Pacino) extracts enormous humour from a man who couldn’t tell a joke if the Holy See depended upon it. He’s the smart kid on a scholarship who, now and then, longs to be accepted by the muddy louts in detention.

Some viewers may find this too much to excuse. Others may, appropriately enough, require a leap of faith to get fully on board

After clunking his way through The Theory of Everything and Darkest Hour, Anthony McCarten delivers his best work yet with a script that makes a virtue of its own talkiness. If none of it were true, The Two Popes might register as a minor masterpiece.

And there lies the problem. Meirelles and McCarten are flogging us a sanitised version of the real story. That is, of course, what movies do. Nobody thought The Great Escape a documentary. But the soft-pedalling on papal abuse, the lack of interest in the church’s attitude to homosexuality and the airbrushing of the popes reeks of propaganda. The script does convincingly address Bergoglio’s uncomfortable interactions with the Argentinean dictatorship. Nothing is, however, said about Ratzinger’s membership of the Hitler Youth.

Some viewers may find this too much to excuse. Others may, appropriately enough, require a leap of faith to get fully on board. Few will fully resist the appeal of two veterans at full throttle.

Epidemics and Society: History shows they are here to stay
8