Once Upon a Time in… Hollywood review: Exhilarating and infuriating

The film isn’t about the murder of Sharon Tate and friends in 1969. It’s about the end of eras

The official trailer for Once upon a Time in Hollywood, the 9th film by Quentin Tarantino. Video: Sony Pictures 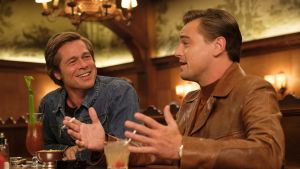 Are the Manson killings a suitable context for this celebration of vintage cool?

Film Title: Once Upon a Time in... Hollywood

Even those stubbornly opposed to Quentin Tarantino’s brand of bubblegum post-modernism might feel obliged to push some grudging gratitude his way this summer. Once Upon a Time in… Hollywood is only the second “original” film – that’s to say neither a sequel not a remake – to top $100 million as the US box office in 2019. The other is Jordan Peele’s Us.

We must conclude that this exhilarating, infuriating, meandering film is both a critical and commercial hit. What an odd result. Moving about the penumbra of the Manson Family murders, Once Upon a Time in… Hollywood plays like one of those cinematic indulgences that, after opening to poor reviews and disastrous receipts, gets later rediscovered and hailed as an undervalued classic. (Heaven’s Gate. Ishtar. You know the sorts of things.) Quentin Tarantino may even have been going for just that look.

The film is not about the murder of Sharon Tate and her friends in 1969. That actor, played little more than fleetingly by Margot Robbie, figures because she lives next door to a fading western star named Rick Dalton (Leonardo DiCaprio) and, when staying over, his factotum and stunt double Cliff Booth (Brad Pitt).

The film is really about the end of various eras, and, looming throughout, the Manson murders could hardly offer a more definitive full stop to one version of the 1960s. But that’s all the killings are here: a closing parenthesis to Quentin’s massive aside on the pop culture of his childhood.

The social changes have already caught up with Rick and Cliff. Not nearly so scuffed or foxed as an out-of-time actor would appear in 1969, Dalton, on the advice of his agent (Al Pacino, having a ball), is considering a move towards spaghetti westerns. With less to lose, Booth seems happy to amble about his trailer, drink beer before the telly and opens cans for his charismatic dog.

The story has scarcely eased from the chocks before Tarantino is leaning into immoderation. At the mention of Dalton’s recent war film, we see a lengthy scene from that film. At the mention of his popular TV series, we see an unnecessary clip from that. Later we get enormous sections of the actor’s latest western movie.

The middle third of the film is taken up with a leisurely stroll around the byways of a rapidly altering Los Angeles. Rick runs up against a member of the Manson Family and, after being escorted out to their ranch, chews the fat with an aging chum (Bruce Dern). Few journeys to inevitable catastrophe have been quite so lacking in momentum.

As is often the case with undervalued classics from an earlier aeon (which this isn’t), the texture is, however, at least as important as the larger narrative. On that score, Once Upon a Time in… Hollywood cannot be faulted.

Tarantino has had enormous fun recreating the sounds, colours and conversations of a vital cultural fulcrum. Nobody could accuse the director of not caring about film, but here he also remembers to acknowledge the spat-out fecundity of contemporaneous TV. The best scene sees a child star talk Dalton out of his galloping, self-regarding despair.

The camera may love these two men, but the film is not entirely on their side (one may have committed a terrible crime).

It remains questionable whether the Manson killings are suitable context for a celebration of vintage style and ancient cool. Tarantino is worryingly careless in his approach to people who deserve better. A scene with Bruce Lee is unnecessarily glib.

Robbie does what she can with sketchy episodes – at least one of which services the director’s feet fetish – but the effect is merely to have us yearn for more Tate.

About the ending we can say no more than Tarantino looks to have missed at least two tricks while working through more of his familiar obsessions. It’s all good, tasteless fun, but that not quite what this history demands.

A diverting indulgence, nonetheless. The catastrophe that was The Hateful Eight is forgotten for now.