Review: There is a fine noir here somewhere, busting to escape the Friends of Ed Norton Cabaret 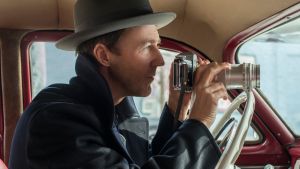 What’s that they say to artists? Kill your babies? It’s particularly important to hack ruthlessly at potential indulgences when directing, producing, writing and starring in a “long-cherished project”. Nobody else is going to do away with the blighters for you.

Still, even Herod the Great might balk at the degree of infanticide invited by Ed Norton’s overlong vanity project. Just consider the music for starters. Norton has commissioned a lovely orchestral score from Daniel Pemberton, but it seems he also promised some work to his pal Thom Yorke. So, on at least two occasions, we break off the Eisenhower-era action for wildly incongruous globules of college rock. One number plays out while the hero – played by one E Norton, of course – has his heroin trip translated as a euphoric dip in a bottomless pool. You know? Like in Trainspotting.

Then there are the outbreaks of jazz. Norton has moved Jonathan Lethem’s source novel from millennial New York to the 1950s for no better reason than it allows him to wear a cool hat, get lectured by sassy broads and attend Miles-alike acts in midtown. It looks as if Wynton Marsalis is a pal too. The great man plays trumpet variations on Yorke’s music in a scene at a jazz club that goes on longer than the Korean War. A famous anecdote about Miles Davis’s rudeness lends some salty dialogue and allows aficionados to brag about recognising it (as I am doing now).

Cut that. Cut this. Cut the other bit. There’s a fine conspiracy noir busting to escape the Friends of Ed Norton Cabaret.

The director plays a gumshoe called Lionel Essrog who, when not struggling with Tourette syndrome, seeks explanations for the shooting of his former boss Frank Minna (Bruce Willis). His investigations bring him into contact with the crooks who have been exploiting legal loopholes to destroy black American communities and siphon funds from subsequent redevelopments. That is an interesting story and it provides much intrigue in the picture’s middle act. Motherless Brooklyn does have some fun dancing with the underground energies that created the modern city.

Good actors work hard within some indifferently framed shots. Willem Dafoe is nice and mad in a beard that looks as if it hooks on at the ears. Bobby Canavale snaps his brim as Essrog’s more cynical colleague. Alec Baldwin coasts as the head honcho with the most to gain from the encroaching corruption.

Sadly, few of the elements fit together with any smoothness. The tone is constantly uncertain. And the eccentricities eventually become grating.

Gugu Mbatha-Raw is excellent as a young black activist, but the Givenchy perfection of her costumes lends an unearthly feel to a film that seems half in love with grit. That look worked for a New York movie like If Beale Street Could Talk that leant into the poetic. The sharpness of the men’s suits and the blueness of Mbatha-Raw’s coat look slightly absurd in this environment. At times the look of the film is closer to Dick Tracy than it is to Chinatown.

The Roman Polanski film is a clear model for a project that never reaches when it can overreach. The script does a decent job of streamlining a complex plot and then undoes that work by weighing it down with the indulgences mentioned above. Whereas Jack Nicholson had a bleeding nose, Norton works through the random outbursts that characterise Tourette syndrome. Inherited from Lethem’s novel, the condition is not treated with any seriousness. Essrog does get the chance to explain how his brain functions, but, by the close, the condition has ceased to play any role in the story and has taken on the quality of a gimmick. One thinks of that “cop with a thing” tradition in 1970s TV: Ironside used a wheelchair, Cannon was fat, Barnaby Jones was old. We don’t do that any more, not least because it seems a little offensive.