European Film Awards another triumph for Irish production The Favourite 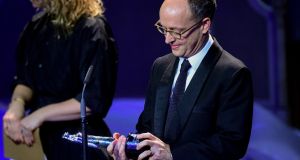 Even before the official ceremony for the 32nd annual European Film Awards (EFAs) kicked off, it was a triumphant occasion for Irish production The Favourite.

Nine months after the same film was nominated for 10 Oscars, The Favourite landed four major prizes for editing, production design and costume, while Dublin director of photography Robbie Ryan won Best Cinematography. It’s the first of more than a dozen major nominations for Ryan’s work on The Favourite to come good.

Chairs are stacked in avant garde piles on stage. The tone shifts at breakneck speed

The night itself is an odd mix of the ramshackle and parodic. Actors and presenters Anna Brüggemann and Aisté Diržiüté fill the gaps between awards with a zany brand of performance art. Chairs are stacked in avant garde piles on stage. The tone shifts at breakneck speed. The ceremony opens with a short film about the UN World Food Programme, followed by a passing of the baton from outgoing chairperson Agnieszka Holland. (It’s not unlike the minutes from a particularly uneventful cummain meeting.)

Greek star Daphné Patakia bumps into the hosts on her way to present the award for Best Short Film to Bogdan Muresanu for The Christmas Gift. Actors Josefine Frida Pettersen and Alex Lawther emerge from a wardrobe to present Ladj Ly with the Fipresci Discovery Prize. Somebody dressed as a Tyrannosaurus brings the envelope that names Buñuel in the Labyrinth of the Turtles as Best Animated Feature Film. A pantomime horse presents Ankica Juric Tilic with the Eurimages Co-Production Award 2019.

Ukrainian filmmaker Oleg Sentsov, who, having served five years of a 20-year sentence was released in a prisoner swap with Russia in September, is brought onstage by incoming EFA chair Mike Downey. The new chairman announces the creation of an undefined International Coalition for Filmmakers at Risk followed by a montage. Suddenly, a bicycle (?) is brought on stage; it almost falls over.

There are many absentees. Céline Sciamma, who is named Best Screenwriter for Portrait of a Lady on Fire, sends a note. Olivia Colman, having already won an Oscar for The Favourite, sends a message recorded on her phone when she is named Best Actress. Antonio Banderas, who wins Best Actor for Pain & Glory, does better when he appears via Skype (or possibly Facetime). The directors of For Sama similarly win Best Documentary remotely. Ed Guiney from Element Pictures accepts Best Director on behalf of Yorgos Lanthimos for The Favourite. He takes further bows when The Favourite wins Best Comedy and Best Film.

An Officer and a Spy, Polanski’s dramatisation of the Dreyfus affair, was nominated for three major awards. It didn’t win anything

Conversely, dozens of the cast and crew of Berlin Baylon arrive on stage to receive the newly created Achievement in Fiction Series Award.

For all the bedlam, there are moments of genuine magic. Iranian director Jafar Panahi says Juliette Binoche “changed the geography of cinema for me” as Clare Denis presents the actor with the European Achievement in World Cinema award. Pawel Pawlikowski wryly accepts the People’s Choice award for Cold War, noting that “people haven’t made very good choices lately”. Werner Herzog is welcomed on stage with a cod-Wagner aria to receive this year’s Lifetime Achievement Award.

In recent weeks, several stories have suggested that the filmmaking community, or at least the French Directors’ Guild, is turning on Roman Polanski. An Officer and a Spy, Polanski’s dramatisation of the Dreyfus affair, was nominated for three major awards. It didn’t win anything, but each announcement is warmly applauded without dissent. Unsurprisingly, he was another no-show.

Adam Driver: ‘There’s a double standard for men and women’
5

How The Simpsons predicted 9/11, Trump and Disney-Fox
6

Why immigration was key to Brexit vote
7

The price of paradise: 82 facts you didn’t know about suicide bombers
8