The official trailer for Parasite, the winner of the Cannes 2019 Palme d’Or. Video: CJ Entertainment 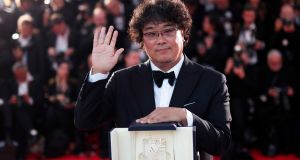 Another busy and contentious Cannes film festival ended on Saturday night with the presentation of the Palme d’Or to Bong Joon-ho for his black comedy Parasite. Bong is the first Korean to win Cannes’s greatest prize and Parasite is only the second comedy to take the Palme in one-quarter of a century.

Parasite concerns a socially excluded family living in a “half-basement” who plan to dislodge the domestic staff in a suburban mansion and put themselves in their place. The film plays as riotous farce for most of its duration, before plummeting into darkness in its closing moments. Alejandro González Iñárritu, president of this year’s jury, acknowledged Parasite’s incisive treatment of inequality, but was keen to clarify that he and his team had no social agenda. “No other consideration other than the film itself should be considered for the award. The cinema has to speak by itself,” he said after the prize ceremony.

Parasite’s victory will be popular with the press. Arriving in the second week, Parasite was the best-reviewed film of the festival and Bong, director of Memories of Murder and Snowpiercer, has been long established as one of his country’s greatest and most surprising film-makers. “The near-perfection of this competition entry . . . takes the breath away,” The Irish Times noted.

The awards of the 2019 Cannes Festival

There were surprises elsewhere. Hoots and hollers were heard in the press room when the Dardenne brothers were announced as best directors for Young Ahmed and Emily Beecham took best actress for Jessica Hausner’s Little Joe. Young Ahmed was judged to be one of the Belgian brothers’ weaker films. Little Joe was wildly divisive – with reviews ranging from raves to brickbats.

Antonio Banderas’s win as best actor for Pedro Almodóvar’s Pain and Glory was, in contrast, greeted with little surprise and much goodwill. The Spanish actor, now 58, is enormously touching as an aging director – clearly based on Almodóvar – and he charmed the audience in the Palais des Festivals with a typically warm speech. “The best is still to come,” he said of his long partnership with Almodóvar.

Over the last few years, Cannes has received criticism for not working harder to include female directors. There were only four women in this year’s competition, but three of their films took prizes. Beecham won for Hausner’s film. Céline Sciamma took best screenplay for 19th-century romance Portrait of a Lady on Fire. More new ground was broken when Mati Diop’s Atlantics won the Grand Prix, essentially the silver medal. Ms Diop, born in Paris to a Senegalese family, is the first black woman to compete for the Palme d’Or. She got the award from the somewhat unlikely hands of Sylvester Stallone.

Quentin Tarantino’s Once Upon a Time... in Hollywood, the noisiest entry in the official competition, went away with nothing, but Quentin could console himself with his win at the Palm Dog awards on Friday. Brandy, a pit bull owned by Brad Pitt’s character in the film, took the top gong at that light-hearted bash for best canine performances.

The 72nd festival was a good one for domestic film. On Thursday it was announced that Lorcan Finnegan’s Vivarium had taken the Gan Foundation Award for Distribution at International Critics’ Week. Finnegan’s film, a sociological horror, was the first Irish film to be selected for critics’ week in 51 years. “The prize will enable The Jokers, our brilliant French distributors, to release our film to a large audience in France, ” Finnegan said. “It’s a strange, funny, sad and frightening nightmare of a film, so now more people will get to experience its full effect in theatres.”

Under the Red White and Blue: Greil Marcus’s Gatsby marred by self-indulgence
7

Charlie Daniels, country star who sang The Devil Went Down to Georgia, dies at 83
9