Review: Kristen Stewart, the classiest star of this disaster, is the most disappointing 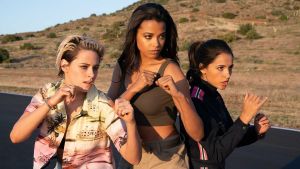 Charlie's Angels: who thought this was a good idea?

Following the press screening of this terrible, terrible film, colleagues and I chewed over the more rancid gobs of dialogue-like stuff. “We’d end up in German prison,” one Angel says. “There it’s schnitzel all the time,” another replies. “Mmm! Not such a bad idea then?” the first replies. What? One critic suggested that schnitzel could be a euphemism for a sexual organ. Could it? Is the joke here that the Angels really like flattened veal in breadcrumbs? Do the writers think that word refers to a sausage?

Hey, you have to keep your brain active somehow when swimming through lakes of bilge. The latest Charlie’s Angels – technically more of a sequel than a reboot – has, over the last year or so, been drilling itself slowly into the obscurer parts of most brains. Every reminder feels like fresh news. Oh that Charlie’s Angels thing with Kristen Stewart, your one out of Aladdin and someone I’ve never heard of? Didn’t I already see that and forget about it?

You did not. The undeservedly tolerant reviews in the United States suggest the relieved reactions of a fellow who, expecting the grimmest prognosis, leaves the doctor’s surgery having lost only a leg. I don’t buy it. The film nobody asked for turns out to be the film nobody deserves.

Artists such as Nicki Minaj, Ariana Grande and Stefflon Don have contributed to a high-end R&B soundtrack that belongs in more exalted company. None of those musicians would tolerate a video that exhibited such slender regard for taste or coherence. Yet $55 million dollars later here we are. Where exactly?

Sabina (Stewart), Elena (Naomi Scott) and Jane (Ella Balinska), three of many Angels on the planet, are tasked with tracking down a digital weapon engineered by MacGuffin Industries (not really, but you know…). One “Bosley” (Patrick Stewart) has retired and another “Bosley” (director Elizabeth Banks) is on exposition duties.

Nothing works. The banter is ex-cru-ciat-ing. The action scenes appear cut together by the random footsteps of a cat on the keyboard. The clothes are so unflattering that one sighs gratefully when, released from high-street mundanity, Stewart gets to dress as a novelty jockey.

None of the actors is shown to advantage, but the classiest star is the most disappointing. Raised to fame by a massive franchise, Stewart has recently slipped comfortably into international arthouse cinema. Nothing here argues for the wisdom of stepping back towards the trash. Keep in with the Frenchies, K-Stew.